Today I had to run an errand and, as I’ve noted before, my car radio is generally tuned to the local conservative station in town. The 15 minutes I spent in the car was during Rush Limbaugh‘s time slot. I will say it right up front. I despise Rush. He represents everything that I find wrong with America today. This is a guy who derides the Left as all militants while spewing hatred to millions daily. It’s absolutely a case of the pot calling the kettle black. 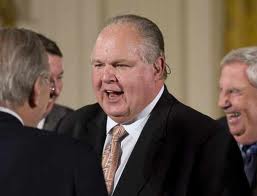 What’s more is that virtually every time I listen to the guy he gets item after item after item wrong or twisted. I’m often left to wonder if it’s by design or simple stupidity and since he doesn’t strike me as an imbecile I’m left to believe he’s doing it on purpose to mislead his listeners. This, of course, turns them into exactly the kind of mindless zombies he claims only live on the other side of the political aisle.

So the segment I caught had to do with the news story in the New York Times with the headline, Salt, We Misjudged You. First of all, I find it hilarious that Rush (and most conservative pundits) will spend countless hours telling everyone just how absolutely useless the New York Times is—except when it reports exactly what they believe. Suddenly then it’s an amazing authoritative source.

So Rush is taking exactly the course I thought he’d take. This was an opportunity to ridicule all science and everyone involved in it as liberals hell-bent on scaring everyone into living only a pure liberal-approved life plan. He literally claimed that every fact science has come up with regarding nutrition has turned out to be a myth. Really Rush? So I guess water is bad for us? This from a guy who never met an Oxycontin he didn’t like.

You think I’m joking to the degree he takes things? He (I assume with a straight face) told his audience of millions that, contrary to what you’ve heard, nicotine is good for you. It reduces the effects of Alzheimer’s along with other benefits. No joke. Rush was advocating the concept that we should never listen to anything science tells us. Brilliant right?

Understand that I too am skeptical of many findings of science because it’s a moving target. Science, like most anything, makes mistakes but that certainly doesn’t mean that everything they find is suspect. Give me a break. One thing I can’t prove but I’m just as certain he’s lying about is a comment he made about his having never paid any attention to his salt intake and—here’s the line—that his blood pressure is perfectly normal. This is really none of my business but he brought it up and this guy is anything but in shape, spends every day sitting in a chair for hours and getting worked up. Plus he’s made it clear he doesn’t watch his diet at all and I’ve never heard him say anything about exercise. If his blood pressure is perfectly normal then it’s nothing more than a total aberration. If this guy sees 70 I’ll be shocked.

However, it’s the rest of the segment that really stuck out. He, of course, went on to deride the rather curious move by Mayor Bloomberg regarding soda sizes in New York City. What he told millions of listeners, for the entire segment, is that Bloomberg has banned the sale of 16 ounce sugar drinks. “Sixteen ounces is just too damned big“, he stated. There’s just one problem with this—that’s not accurate. Bloomberg is moving to ban the sale of fountain drinks above 16 ounces. Okay, so perhaps he misspoke and he’ll correct it later. I’ll keep an eye out for that but I’m not going to hold my breath.

My own view is that I have major questions about this issue. My initial reaction is that it’s going too far. However, I also would be curious to see the impact of this after a period of time. I don’t know many people, aside from Rush Limbaugh, who want to go back to the days before smoking bans. I also wonder if, given the small hassle, just how much of an impact a relatively transparent move like this could make towards the health of New York City residents. This is exactly the kind of thing that jumps to mind in any fan of Malcolm Gladwell‘s, The Tipping Point.

Let’s face it—we’re lazy much of the time. We buy 44-ounce drinks because we can. I don’t recall a major hue and cry from the masses back when there were no such options at the convenience store. Maybe this is another of those stealthy solutions that will have an impact. I don’t know. However, what I do know is that I’m not about to go suggesting that sugar is just great for you and you should ignore everything you’ve heard about it. That entire diabetes nonsense is all a ploy by liberal scientists to scare you into their nefarious plans to crush Big Sugar. If you think that last line is silly then just change the word “sugar” to “salt” and that exactly what Limbaugh said was going on regarding studies of salt over the years. Ugh.