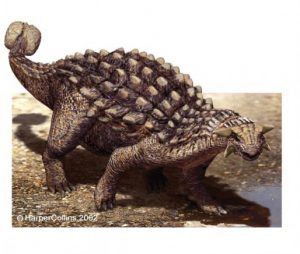 Rounding out the Ornithischia (“bird-hipped dinosaurs”), we have the Thyreophora (“shield bearers”), more commonly known as the armored dinosaurs. These dinosaurs are exemplified by the ankylosaurs and the stegosaurs. The ankylosaurs are the dinosaurs that were covered almost entirely in bony armor from head to tail, and many also had either bony spikes or a massive tail club. Their cousins the stegosaurs are perhaps even more well known and had an assortment of plates and spike running along their backs, which varied from species to species. 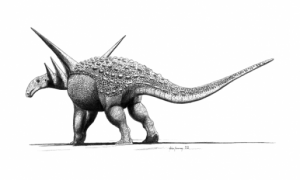 The group Ankylosauria was named by Baron Franz Nopsca in 1915, a fascinating man who led a wondrous and tragic life, to whom I should devote an article in the future. This group had bony plates, called osteoderms, covering every inch of their bodies except for their bellies. Even their eyelids had bony plates! The two main divisions of the Ankylosauria are the Ankylosauridae, whose members tend to have a tail club and that includes Ankylosaurus itself, and the Nodosauridae, which tend not to have a tail club but instead large shoulder spikes. There has been a long-standing debate over whether a third group, called the Polocanthidae, is valid. If so, it would consist of a basal (“primitive”) group of animals that look roughly like nodosaurs but that fall lower on the evolutionary tree than either ankylosaurids or nodosaurids.

The famous Stegosaurus – also the state fossil of Colorado!

The Stegosauria was coined by O.C. Marsh (a recurring theme) in 1877. The iconic member of this group is Stegosaurus, although there is quite a bit of diversity in the wider group. The important features of Stegosaurus and its kin are, of course, the plates and spikes. The plates have been the subject of quite a bit of controversy, as are so many things in paleontology. Due to the lack of any sort of a modern analog, they have been interpreted as many different sorts of structures, ranging from defensive armor to display structures to thermoregulatory organs. In addition, the actual arrangement of the plates on the animal’s back has been widely debated, and I am honestly not sure just why the generally agreed upon arrangement that is seen today has become so widely accepted.  Based on the evidence of extensive blood flow to the plates, the thermoregulatory function of the plates (that is, their use in helping the animal to warm up or cool off) is now generally accepted. They may also have been used as display structures, but they were likely too thin and fragile to have been effective armor.  The number and arrangement of plates also varied among species, with some species trading plates for extra spikes.  Finally, saving the best for last, is the thagomizer. “What’s a thagomizer?,” you ask. “That can’t possibly be a scientific term.” You’re half right.  The thagomizer is the now scientifically accepted term for the set of tail spikes at the end of a stegosaur’s tail, which was likely used as a weapon for self defense. The wonderful story behind the word, however, is that it came from a Gary Larson cartoon in which a group of cavemen sit in a lecture and on the projection screen is the tail of a Stegosaurus. The lecturer says, pointing to the tail spikes, “Now this end is called the thagomizer… after the late Thag Simmons.” The term has subsequently been accepted by the scientific community as the actual name for this structure.

A cousin of Stegosaurus called Kentrosaurus. Note the paired spikes along its back in place of the stereotypical plates. (artist – Nobu Tamura)

There are also a couple of popular notions pertaining to stegosaurs of which I would like to disillusion you all. First, It is frequently said that a Stegosaurus‘s brain was no larger than a walnut. While it is certainly true that it had a very small brain for its size, its brain cavity was roughly the same size as that of a dog, certainly larger than a walnut. Second, there is another popular notion, perhaps somewhat less frequently quoted, that certain large dinosaurs like stegosaurs and sauropods (“long-necked dinosaurs,” the subject of next week’s article) had a “second brain” in their hips in order to aid in fine control of the tail or simply with the lag induced by the astronomical size of some of these animals. The evidence for this is an expanded area in the vertebrae in the pelvic region associated with the space for the spinal cord. However, this idea is no longer widely accepted. It turns out that living birds have a similar enlargement in this region that is for the presence of glycogen bodies, structures that are involved in regulating sugar levels in the nervous system.