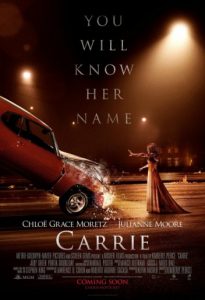 A shy teen struggles with callous classmates and an overprotective mother until she taps into a unique — but dangerous — ability in Carrie.

This is a remake of the classic 1976 horror film based on Stephen King‘s best-selling book of the same name. The story centers on social misfit Carrie White (Chloë Grace Moretz), who wants nothing more than to be accepted by her peers. She just doesn’t mesh with them and comes from a sheltered home where her devoutly religious mother (Julianne Moore) endlessly obsesses about the evil in everyone and everything. Carrie finds herself abused both mentally and physically at home and at school. It’s during all of this strife that she discovers a natural ability with telekinesis that, left purely to emotion, can cause undue harm to people and things around her.

The original film captivated horror audiences worldwide and boasted an all-star cast including quirky Sissy Spacek in the lead role along with Piper Laurie playing her mother. Both were nominated for Academy Awards — virtually unheard of in a horror film. It even features a young John Travolta.

The remake, unfortunately, bears only a passing resemblance to the original. Nothing about this effort works. The story fails on several fronts. First, it skips over key background elements that helped set the stage for the original. Then it gives us a surrounding cast of single-note stereotypes. We don’t buy into any of them. 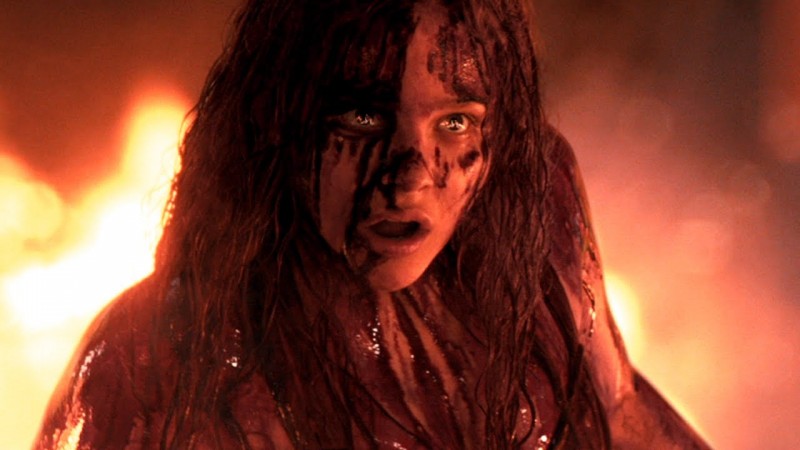 The worst affront is in the casting. Moretz is growing into a skilled actress but just isn’t the right choice at all as Carrie. The role calls for someone who naturally comes off as oddball — a bit of an Olive Oyl type. Spacek had that in spades. Moretz, meanwhile, has played almost nothing but attractive, self-assured leader types that stand in stark contrast to what’s called for here. It’s impossible to see her as the undesirable, social outcast.

At about the midpoint of the film, it seems that the producers realized the disconnect and decided to just go in an entirely different direction, opting for the easy payoff of campiness and effects. Not only doesn’t it work, but the special effects are also jarringly terrible. They’re so bad that Moretz ends up looking ridiculous bringing them about. The transformation from one extreme to the other is so complete that, by the end, we can’t help but feel sorry for the bad guys, which is quite an unwanted achievement all its own.

Carrie‘s biggest psychic power is in its ability to dull everyone into a stupor while watching this misguided, unnecessary train wreck of a remake.