Another week brings another Best Film Oscar nominee into focus with Zero Dark Thirty, the retelling of the hunt and killing of Osama bin Laden. 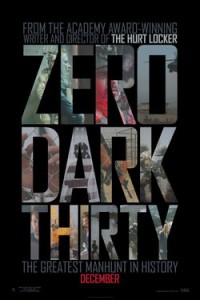 The film stars Jessica Chastain as “Maya” who, may or may not have existed. My guess would be that she stands in as an amalgam of several key players of like mind and that it’s simply easier to tell this story from a single perspective than from the viewpoint of several more complicated characters.

The story, as presented, is nearly three hours long with most of that time spent in the fact gathering realm. The last third breaks into the mission itself and feels, in many ways, like a completely different film.

Sadly, the first segment is overly long and plays like a single stuck note. Maya’s the only resource that sees the truth while everyone else is lost in politics. As the new kid on the block she’s got to work twice as hard to convince the powers that be that her view is the only correct one.

The fact-finding portion of the film is laden with jargon and sketchy references that lose the audience here and there. Maya’s initial boss, Joseph Bradley (played by Kyle Chandler), was a bit of a mystery to the point that when his character is highlighted by name I had no idea who it referred to.

I also feel as if the information gathering could have been told in a more compelling manner. It all feels generic and emotionless—except for Maya. There are clearly several potentially powerful elements to this process that just never seem properly leveraged. Instead it devolves into a bit of a worn story involving the old out of touch men versus the only true hero having the extra challenge of being a woman.

I couldn’t help but think of Argo. It crafted similar challenges into a riveting roller coaster ride. Unfortunately it did so by essentially making things up out of thin air. Of course we also don’t have any clue as to how much of this story we can believe—and may never know. For me the sweet spot lies somewhere in between and neither film gets the recipe perfect.

When the film morphs into the raid sequences we’re quickly transported along for an edge-of-your-seat experience. Quite unexpected was the silence that surrounded much of the mission. The feeling brings to bear the isolation, challenge and risks of being not only on this dangerous mission but of all of it happening in a foreign country whose inhabitants might rise up at any moment. The walls of the theater seemed to close in rather suddenly.

I’m surprised to say that the actual moment of bin Laden’s death, as portrayed, wasn’t very satisfying. It happens in an instant and you’re not even sure it’s him. His wasn’t the only ending that felt that way. The film itself  concludes quite abruptly and left me wanting a bit more.

In the end I found it to be a curious, well acted story, but not a very interesting one. The biggest surprise for me was how flat it all felt in retrospect.