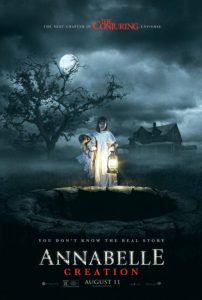 How does a movie about an evil doll surprise you? When it’s mostly not about the evil doll! This is why you should never prejudge a movie before you see it, as tempting as it is. Spin-offs reliably don’t live up to the originals. However, every now and then, luck favors the moviegoer. Starting with The Conjuring, producers created a weird franchise of connected properties, including Annabelle. When I heard about the spin-off prequel’s prequel, I thought that the filmmakers dove too far into the rabbit hole. Fortunately, creativity and expertise in horror ruled the day. Annabelle: Creation caught me off guard as an exciting, edge-of-your-seat horror film worthy of its own genesis.

In a prologue set in 1943 that feels like a part of the Child’s Play series, toymaker Samuel Mullins (Anthony LaPaglia) designs and builds the creepy-looking Annabelle doll. After a tragedy, he and his wife Esther (Miranda Otto) keep to themselves until they open their house 12 years later to Sister Charlotte (Stephanie Sigman) and her six female charges left homeless when an orphanage closes. One of the girls named Janice (Talitha Bateman) suffers from polio and uses a wheelchair and crutches while another girl called Linda (Lulu Wilson) looks after her. Janice pokes her crutches where they don’t belong and discovers that creepy doll in a locked closet papered with pages of the Bible. Demonic possessions and spooky occurrences follow, culminating with a finale that will certainly get your blood pumping.

Although LaPaglia and Otto take top billing, this film really concentrates on what happens to the girls as the mysteries of the Mullins house unfold. Given that LaPaglia and Otto are both Australians, I thought for sure that the remote, dusty site for the house was somewhere in Australia. Nope. Los Angeles area. Their efforts frame the movie, and they both get some key dramatic scenes later on. Bateman and Wilson carry the movie on their little shoulders, and it all works as they try to protect each other from the evil things that they encounter. Wilson reminds me of a younger Joey King with her blend of spunk and cuteness. Bateman sails through the more challenging scenes given her character’s affliction and later plot developments.

Annabelle: Creation entertained me so much because of its variety of scares and frightening scenes. Although director David F. Sandberg (the ambitious Lights Out) and writer Gary Dauberman (Annabelle) jolt you with traditional jump scares in which something comes into view unexpectedly, the majority of the terror arises from the situations rather than cheap editing. You just know that the house’s dumbwaiter will lead to a horrific sequence, and the filmmakers don’t disappoint with that device or the chair lift with Janice on it that moves ever so slowly. The house and grounds contain many sites perfect for building tension, including a secret room, a shed and a well. My favorite scene involves a gun that shoots a ball connected back to the gun with a string. Given the possessions that take place, the ghosts that appear and the scary house that seems to rebel against the occupants, Annabelle: Creation takes the best elements of The Exorcist and The Amityville Horror and weaves them into the tapestry of its own story that starts with the titular doll.

The Annabelle doll made its mark in a small sequence in The Conjuring. That led to a stand-alone movie and, now, a sequel to that film that is really a prequel in plot. 2016’s The Conjuring 2 continued the stories of paranormal investigators Ed and Lorraine Warren. Given their extensive work, there can always be another sequel to The Conjuring. However, the next franchise film will be The Nun as it details the origin of the evil nun who randomly appears to scare characters in these connected films. As a nice nod to the real-world Annabelle doll that inspired the film version, look for the Raggedy Ann doll in Annabelle: Creation. Given that the label on the doll created in the opening sequence marks it as 1 of 100, could there be other dolls and movies on the way?

Although this movie appeared to be a throwaway horror property dumped in the summer season, the truth is far from that common treatment of such fare. Nice touches enhance the experience like the use of “You Are My Sunshine,” turning it from happy and peppy to creepy and sad. There are some minor missteps like Sister Charlotte hearing the girls’ confessions. As a Catholic, I thought that power was reserved for priests. Every slip or dead spot gives way to more memorable bits like Esther’s half-mask and what it hides. Annabelle: Creation succeeds because of its inventiveness and efforts to give birth to something that you would not expect.