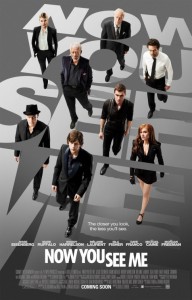 The new film Now You See Me starts off with a wonderful opening scene involving some great examples of the craft in a real-world setting. We meet four solo — but very talented — magicians who each use magic for their own personal gain until, one day, they’re compelled to come together for the biggest feat of their careers.

In their first mutual act, they stun everyone by transporting a volunteer in the audience from their stage in Las Vegas to the inside of his bank’s vault in France. Once there, all the money inside is sucked out and distributed randomly to everyone in the audience. Think Robin Hood. This, of course, is a bank robbery that draws the immediate attention of the authorities in both the U.S. and France. The problem is that there’s no proof to use against them unless someone wants to try to convince a judge that magic is real.

The top U.S. cop is played by Mark Ruffalo, who’s forced to work with an attractive but green Interpol agent from France played by Mélanie Laurent. They enlist the aid of an expert who both specializes and revels in exposing the secrets of magicians played by Morgan Freeman.

The biggest challenge for a film about magic is to not let the plot or the illusions distract from the story itself. Unfortunately, the most obvious sleight of hand in this film is the disappearance of the script. Now you see it. Now you don’t. This is another film that tries to outsmart everyone and, instead, just ends up as one confusing mess. It feels as if it’s being reinvented at will to match whatever the last twist gives us — and not with any subtlety.

As the police start to put the pieces together, the film transforms from a smart, measured drama into a cheap series of action sequences, ridiculous effects and highly-suspect character interactions.

Everything in the film looks great with the exception of the biggest tricks. Many would be simply impossible without the aid of special effects, and that’s a form of cheating I never appreciate in a film of this genre. On-screen magic should look real — not surreal.

The actors are all at the top of their games, but there’s just something missing in the casting. Somehow, they just don’t gel together in any way that works. The magic that was so evident between Eisenberg and Harrelson in Zombieland is entirely missing here.

In the end, we get a film that forgot the most important thing about performing — to always be entertaining.