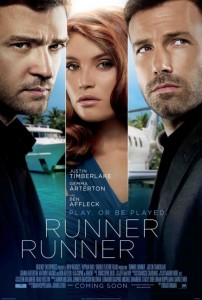 A bright young Ivy Leaguer, in desperate need of tuition, turns to online gambling to raise the money but gets more than he bargained for in Runner Runner.

Justin Timberlake plays Richie Furst, a Princeton student who’s as bright as they come but who doesn’t have most of the money to finish out the semester. Thankfully, he’s a whiz at online poker and decides to raise the stakes by playing for the difference. Of course, it all goes terribly wrong, but something just doesn’t feel right. On closer examination, Furst realizes he’s been systematically cheated. His answer is to head down to Costa Rica to confront the owner — Ivan Block (Ben Affleck) — of the company that orchestrated the con.

Much to everyone’s suprise, Block not only offers to refund his cash, but he then makes Furst an irresistible offer to forget about his degree and come to work for him there in Central America. Furst jumps at the opportunity but then slowly realizes that the devil is in the details and that this offer comes with some cable-like strings attached.

It all sounds intriguing, and the fast pace keeps up what energy there is, but there just aren’t enough high cards left in the deck. The biggest issue is that Affleck doesn’t work at all as the heartless, conniving Block. He comes off as ineffective or just not interested in the role. Timberlake fares much better and wears the wide-eyed everyman role well. Unfortunately, it’s all to no avail. The story undermines them both, jumping from one uninteresting subplot to another, including a slew of subpar performances by the surrounding cast. Gemma Arterton as the dubious love interest is little more than set decoration. 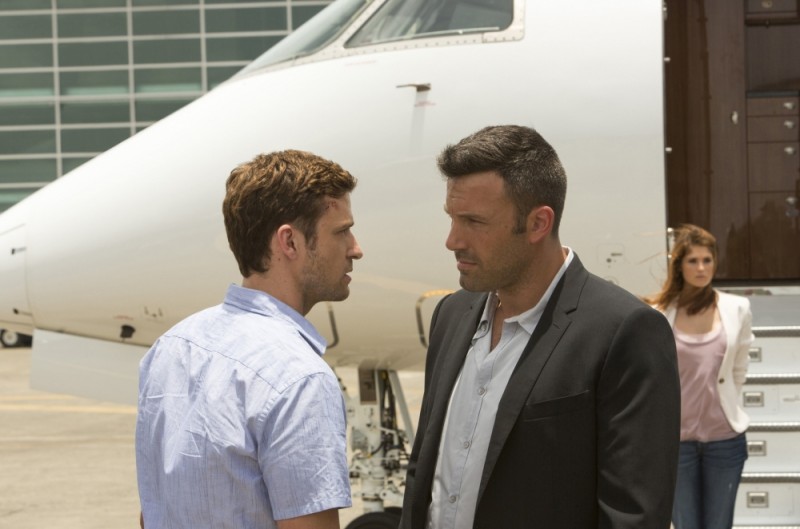 The story wants us to believe that Furst and his closest friends are all incredibly smart — certainly smarter than most of the rest of us — yet they all fall prey to trouble the audience can see coming from a mile away. Add to this a ridiculous initial concept and, once in Costa Rica, an FBI subplot that’s entirely head scratching, and it all adds up to a busted hand.

The bottom line is that it ends up feeling like one of those long stories your friend is so excited to tell you but about which — no matter how hard you try — you just can’t stay interested. I kept thinking of one of the movie’s taglines, which is “Play. Or be played.” We’ve been played.