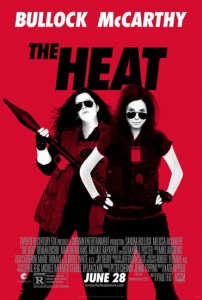 Sandra Bullock as an FBI agent and Melissa McCarthy as a Boston cop begrudgingly work together on a case that pushes them to turn up The Heat.

Bullock plays FBI agent Sarah Ashburn — an agent with a personality as subtle as a brick and an ego to match. When a big promotion looms, she’s told to forget it because she’s despised by everyone in the department. Her last chance comes when she’s sent to Boston to track down a drug kingpin. Her superior will consider her for the post if she can get the job done with minimal complication. Once there, she immediately gets on the wrong side of Detective Shannon Mullins (McCarthy). Mullins is, of course, an all-out train wreck with a badge. The two are forced to tolerate each other for the common good, setting up a female Odd Couple.

Stated plainly, I found nothing to like in this film from the first frame to the last. The two main characters are not only unlikable as portrayed but unlikable in general. None of their interaction seems genuine. The rest of the cast includes an FBI boss (Demián Bichir) with an accent so thick that you can’t hear half his lines and an albino agent (Dan Bakkedahl) who I swear was just doing a stand-up routine on open mic night. The only plus is Michael McDonald, who plays a wonderfully cold-blooded bad guy but who’s on screen only sparingly.

There are jokes, but you’ve likely seen the majority of them in the preview. The rest are shoehorned into scenes in seemingly random skit-like fashion. I suspect women will find this funnier than men but not by much. McCarthy’s completely out of place as a rough and tumble cop. She’s a big woman, but the role makes her look downright unhealthy and ridiculous. She gets the few good lines there are, but it never adds any momentum. Saturday Night Live all star Jane Curtin, playing Mullins’s mom, hinted at some great possibilities, but nothing ever materializes. The rest of her clan is rife with cringe-worthy, immediately forgettable, over-the-top Boston stereotypes.

Even the director seems to have phoned this one in. There’s one continuity error that’s so obvious that it ruins an entire key scene. We then get a couple of segments that question Bullock’s intellect for agreeing to them. One involves both leads suiting up in body armor. Just look at Bullock’s face. Yeah, it’s that absurd, but then it’s quickly trumped by another where she literally crawls around a hospital floor due to a small knife wound but somehow it seems to have affected both her legs.

The film gets no help from the soundtrack, which is completely wrong for the material and just bad in general. Even the style of the opening and closing credits stunk. What a mess.

My advice to everyone is to paraphrase the old saying: If you can’t stand The Heat stay out of the theater.