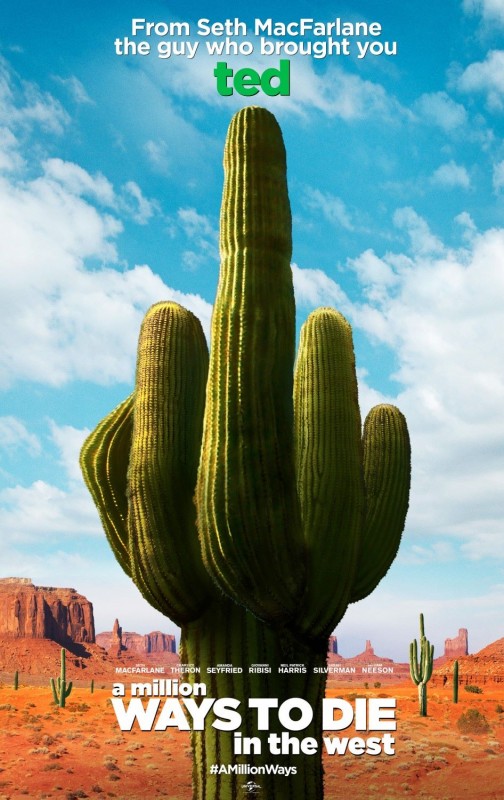 I love comedies, and I enjoy certain types of Westerns as well, especially those that push the boundaries in some way like Unforgiven or The Proposition. A Million Ways to Die in the West purports to be a Western comedy, yet it satisfies only the Western half of that description with its setting. It doesn’t adhere to any type of format for a Western that I experienced in the past. If the spirit and wisecracks of the trailer had been expanded to two hours, it could have been at least an enjoyable comedy if not hilarious. Instead, it’s like being tied to an anthill and waiting for the ants to devour your eyes. Yes, it’s that painful. You can see what little comedy there is by watching the trailer. Beyond that, it’s some hybrid of drama and romance that doesn’t work on any level. I loved Ted and pointed a lot of people toward theaters to see the comedy that made me laugh so hard that I missed half of the lines the first time that I watched it. It makes no sense that Ted’s creator is also responsible for A Million Ways to Die in the West, a really bad comedy with Western trappings.

Director Seth MacFarlane and writers MacFarlane, Alec Sulkin and Wellesley Wild reprise their roles from Ted, so it must have been a completely different set of creative meetings that led to this disaster. From the trailer, I expected a film in which the running joke was that someone died in the town every few minutes. That concept, with death happening almost constantly, could have been a hilarious experience. Instead, the body count is less than 20, and the trailer shows almost all of those death sequences. MacFarlane is mostly known for Family Guy and his incredible array of voices that he uses for that show and the other cartoons on his roster. I saw his Twitter updates while this movie was being filmed and his reassurances that this would all be worth the wait. Comedy is one of the toughest genres to get right, and I’m honestly surprised that all of the hours spent on location didn’t produce more humorous moments.

A Million Ways to Die in the West takes place in a small town in Arizona in 1882. This is your typical Western town with a saloon, a bank and a wide, dusty main thoroughfare. In fact, the vistas and scenery are quite beautiful, so MacFarlane at least picked great locations. He stars as Albert Stark, a substandard sheep farmer who’s in love with the uptight Louise (Amanda Seyfried), a young lass who wants more out of life than Albert can provide. She dumps Albert to go with Foy (a moustached Neil Patrick Harris), so Albert is a free man when mysterious newcomer Anna (Charlize Theron) shows up out of the blue. Tough guy Clinch Leatherwood (Liam Neeson) arrives to cause trouble, and there’s a somewhat humorous running gag of a virgin named Edward (Giovanni Ribisi) whose girlfriend is Ruth (Sarah Silverman), a town whore who goes out with Edward almost immediately after finishing her duties. Silverman has perfect comedic timing, as evidenced in many TV shows, movies and comedy specials, and this movie is no exception. The problem is that her punch lines almost all involve unnecessary vulgar language. It’s funny the first time, but that ship sails fast.

I like the cast assembled for this production. The material just doesn’t do them justice. Albert speaks with dialogue that sounds modern, and MacFarlane just doesn’t make a great lead. He comes off as too wimpy and bland. Harris steals every scene, despite a song-and-dance number written by Stephen Foster called “If You’ve Only Got a Moustache” that’s hard to watch. Theron is actually quite good and does the best acting in the whole shebang. Her character is believable, and if she had been the focus, it could have been an entirely different Western. Neeson plays a great tough guy. The only problem is that this is supposed to be a comedy. If he had a lisp or walked in a funny way, that would fit. Instead, his performance provides further confusion about the direction and focus of the film. Wes Studi briefly appears as a stereotypical Native American named Cochise, and there are plenty of surprise cameos throughout, one of which is ruined unnecessarily in one of the trailers. There’s a good post-credits scene, but I find it hard to recommend that people stick around after they probably felt like they were dragged through the street by wild horses. 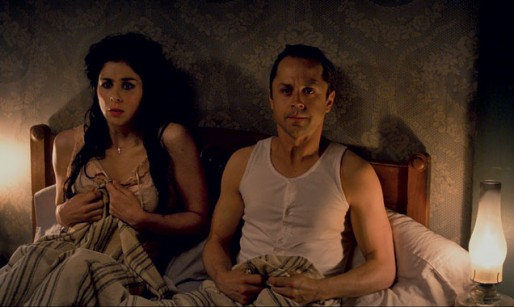 There is an attempt to be vulgar, scatological and crude throughout the movie, and that usually doesn’t bother me unless it somehow calls attention to itself. Gross-out comedies can be as entertaining as those without the adult or potty humor. A joke with Foy’s stomach issues lasts way too long, and many other scenes just don’t work because they seem forced or too outrageous. One sequence speaks to exactly what’s wrong with the movie. At one point, MacFarlane decided that the audience should witness a close-up of a sheep’s penis peeing on Albert. He couldn’t even get that right, so the joke was ruined on me. I was confused because he presented the scene in such a way that I thought he did a cut to someone in an outhouse peeing through a hole in the wall. If you can’t even get a penis joke right, then it’s time to call it a movie. Put that quote on my tombstone in Boot Hill. While you’re there, you’re sure to find A Million Ways to Die in the West dead and buried. I’ll hold out hope for Ted 2.