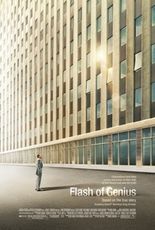 This past week I saw another two movies and for the first time in a long time I felt like there were a lot of choices for a change.

It stars Greg Kinnear in the lead role and he does a fine job as usual.

The biggest problem with the movie is that it never really takes the time to explain why the intermittent windshield wiper is such a big deal. We’re all so used to it now that it’d be like having a movie about the guy who invented the Post-It Note.

Furthermore, it’s pretty standard fare as these stories go. Little guy invents something new, takes it to big business, has faith they’ll treat him fairly, gets screwed, sues, ends up losing everything in the battle but ultimately prevails.

Trust me, I didn’t ruin it for anyone as the movie makes it pretty evident that it’s going to be the same standard story all the way through. It’s a good movie for younger teens as an educational experience in why you shouldn’t be so trusting of corporate America but that’s about it.