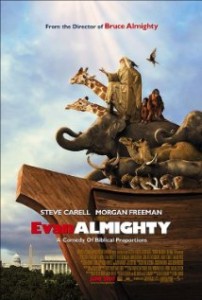 On Sunday we got together for my mother-in-law’s birthday and as part of the day we saw Evan Almighty together. Evan Almighty is a decent movie. It’s getting hammered in the reviews and I can see why but it’s not terrible. I think after movies like Knocked Up and 40 Year-Old Virgin people just expect something else here. This was actually a decent family movie where neither of the others are. This is a feel-good movie fit for just about any audience. It’s not about cutting-edge humor or lots of complex innuendo. It’s just light fun.

There are some things about it that just don’t work. The story provides a flood of its own in questions that beg an answer. There suspension of disbelief is just a bit too far of a leap here. By comparison, it’s predecessor Bruce Almighty, is entirely plausible.

The cast is also just wrong here. Very few people feel right in their roles with the exception of John Goodman as the evil politician and, of course, Morgan Freeman as God. The biggest flaw in casting is with Lauren Graham who plays Steve Carell‘s wife. While she really is 40, she should be quite flattered to hear that she looks nothing like it. I wouldn’t have placed her at over 30. She just looks entirely incapable of having had three children of the ages presented here. She also doesn’t come off as the motherly type. She seems to me to be better suited for more outgoing roles. I like Wanda Sykes in general but she wasn’t quite a fit here and John Michael Higgins was totally miscast.

If you can put those issues aside and just sit back and let the movie take you for the trip it’s on, you’ll find the movie to be enjoyable and generally funny. Steve Carell knows how to get a laugh out of just about anything and it’s an asset here. There are some good laughs but it’s a telling sign when people are laughing more during the credits than they did during most of the movie.