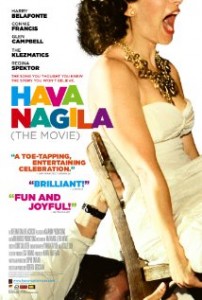 The quirky song that virtually everyone in America has experienced at one time or another is uncovered in the documentary Hava Nagila (The Movie).

The Electric Slide, The Hokey Pokey and even YMCA have nothing on this age-old Jewish standard. We all know it. We’ve all experienced it — or soon will (for younger readers) — and yet almost no one knows anything about its origins. Is it a song? Is it a dance? Is it both? The producers of the film set off on a worldwide trek to discover everything they can about this iconic tune.

I fully expect most everyone hearing about the film to raise an inquisitive, doubtful eyebrow. After all, this sounds about as exciting as an in-depth documentary on shoelaces — not just any shoelaces but specific shoelaces of a specific culture. Is it possible for any film to take such a seemingly bland topic and make it compelling enough for a movie? Let’s find out.

The very first thing the movie does right is not take itself too seriously. Much of it is handled firmly tongue-in-cheek with small jokes that carefully disarm the viewer, allowing it to work a bit of magic. The producers draw us into a journey of discovery through incredibly surprising interviews, thoughtful questioning and nostalgic footage that is, at times, mesmerizing, touching, funny, informative and even astonishingly moving.

Along the way, you’ll find out much about the song but also quite a bit about Judaism itself. Make no mistake; the film is targeted specifically to Jews, but I suspect most non-Jews will be captivated by its approach.

The wonderfully presented interviews are the driving force behind much of the film. The producers introduce us to all manner of people, including many top show business names — most notably Harry Belafonte, Connie Francis, Glen Campbell, Leonard Nimoy and Regina Spektor. Each brings a unique perspective that ranges from reverence to outright hostility towards the subject. Then there’s the treasure trove of classic and lesser known clips of the song being performed in countless ways — many that aren’t quite so traditional — underscoring its universal cachet.

The movie is almost the perfect length at a brisk 73 minutes, but it still manages to get slightly lost towards the last third before regaining its sure footing for a strong ending.

This is one of the biggest surprises of the year. It’s a movie almost anyone can enjoy even though it never actually reaches its own stated goal. The bottom line is that this is one pilgrimage that’s worthy of our attention.