The movie poster for Robot & Frank evokes a bit of wonder that grabbed my attention instantly. This was a film I needed to see. The multitude of positive reviews certainly didn’t diminish my interest either. Leonard Maltin called it, “one of the most enjoyable indie films of the year.” 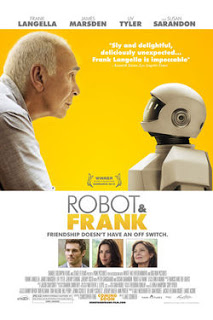 It stars Frank Langella, most conveniently, as Frank who’s a retired jewel thief getting on in years. Frank’s starting to show early signs of significant memory loss though we’re never told what the specific diagnosis is (it’s not important). The main problem is that Frank lives alone in a big house that’s getting harder for him to maintain—though he, of course, doesn’t see it that way. We learn that Frank’s divorced and his two kids (played by James Marsden and Liv Tyler) are growing more concerned about his well-being.

We’re told the story takes place in the “near future” and this comes in handy as, in this future, robots are more commonplace and used for various menial tasks. Frank’s son manages to get a brand new prototype of  robot that’s specifically designed to act as a health care provider as well as help take care of much of the household duties. Frank wants nothing to do with the robot since he’s pretty sure nothing’s wrong. A robot will just get in the way.

That’s where the story takes off. How will Frank get along with this rather curious device, if at all, and will it prove beneficial to his health—or is it all just a simpler solution for Frank’s kids to appear to be doing all they can to help?

The kids characters are extremely under-defined. Most obvious is a terrible miscasting of Frank’s daughter Madison in Liv Tyler. I like Tyler but here she seems entirely out of place and, frankly, distracting. James Marsden fares only slightly better.

Langella is always reliable and his work here is, likewise, top-notch. The robot is also done very well and is voiced by Peter Sarsgaard. Another major shining light is Susan Sarandon who plays a local librarian that Frank’s clearly smitten with. She looks great here and every scene she’s in pops off the screen.

The movie is quite subdued and a bit dark. The problem is it can’t quite make up it’s mind as to whether it’s a comedy or a really dark emotional vehicle. The end result is a rather flat, dull experience. It’s a curious film but it just isn’t a satisfying one.