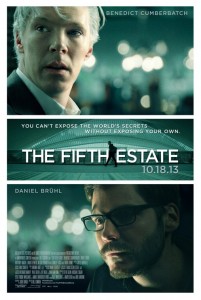 An outcast rogue hacker turns his skills to exposing the world’s biggest corporate and political secrets, ushering in a new era of information freedom in The Fifth Estate.

This is the true-life story detailing the origins of one of the most powerful grassroots organizations the world has ever seen — WikiLeaks — and its founder, the quirky, eccentric and possibly unhinged Julian Assange (Benedict Cumberbatch).

Soon after gaining some political notoriety, Assange meets an introverted and brilliant technologist, Daniel Berg (Daniel Brühl), at a tech conference in 2007. The two team up to grow WikiLeaks into a catalyst that explodes the myth of secure data, shaking the entire information industry to its core. Now facing an enemy beyond their understanding, every government agency and top corporate entity resorts to frantic measures in an effort to protect their sensitive — and likely damaging — data.

These two ordinary but dedicated tech wizards wield previously impossible control to fundamentally change the world as we know it. That power tests both of them and their relationship with one another in ways that neither could have possibly fathomed. 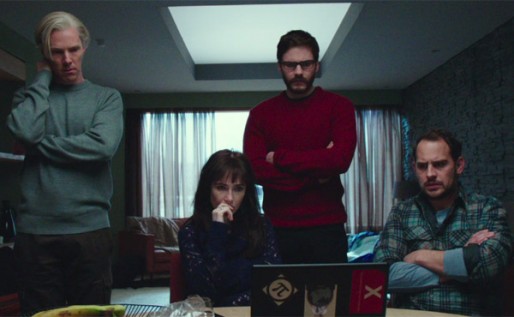 The film is based on two respected books on the subject, and its foundation includes a story with built-in tension, intrigue and suspense that would make any filmmaker do backflips to be associated with. Sadly, nearly all of that potential is unrealized in this confusing, misguided effort.

The fault lies almost entirely with director Bill Condon, whose previous work includes one of my favorite films (Kinsey) but who’s more recently known for his direction of two lackluster films from The Twilight Saga series. For whatever reason, Condon decided that this compelling story would be improved by adding over-the-top artistic shots and effects that do nothing to advance the plot. The script also leaves the viewer completely unprepared for several essential storylines that demand detail that never comes. We have little idea, for example, what the moving pieces are that bring down a corrupt bank. The entire subplot involving U.S. government resources, most notably played by Laura Linney and Stanley Tucci, is poorly presented, entirely perplexing and ultimately unsatisfying.

The two main stars — Cumberbatch and Brühl — are the only bright spots in the film. Their performances are electric and noteworthy. The rest of the cast are crushed beneath the layers of interminable fog.

I have little doubt that the two books this is based on would offer a much better analysis of what clearly should be a riveting, suspensful, wonderfully prescient tale. Unfortunately, this treatment leaves the viewer knowing almost nothing more about WikiLeaks than they knew going in, but hey, at least it had those trippy graphics.