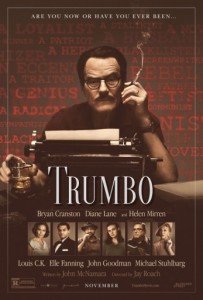 A highly-regarded screenwriter has to reinvent himself after being blacklisted by the film studios in Trumbo.

America after World War II was a country overflowing with pride and opportunity. The fight to preserve liberty and freedom delivered home a populace desperate to revel in the seemingly boundless embrace of both concepts. Nowhere was this excess more evident than in Hollywood — both in its films and in the people responsible for them. Behind the scenes, a new enemy was lurking just around the corner. A vocal minority began to rise up and question the inner drive of the people creating our entertainment. The fear of Communism took root and threatened to destroy the very peace that we fought so hard to save.

Much to his complete shock, screenwriter Dalton Trumbo (Bryan Cranston) suddenly finds himself surrounded by a government and a country demanding that he answer for the new unpardonable sin of being a Communist. He and nine of his peers were called before the House Un-American Activities Committee and pressured to admit their disloyalty to the nation. The 10 were the first victims in the viral spread of the Red Scare that would ultimately destroy the lives of many and divide a nation. Trumbo’s only option was to weather out the storm any way imaginable in order to keep his family above the ever-rising tide against them.

Trumbo’s infamous fall from grace is a history lesson deserving of a proper telling. This isn’t quite that platform. Director Jay Roach, known primarily for directing campy comedies, seems outmatched by the more serious material. Not surprisingly, the film is best when it breaks out the one-liners. Along the way, it packs some exceptional performances.  Louis C.K. seems perfectly cast as Trumbo’s troubled writing partner Arlen Hird. John Goodman, as B-film maverick Frank King, owns the screen every time that he’s on it. The real standout is Helen Mirren‘s spot-on embodiment of famed gossip columnist Hedda Hopper. It’s a mesmerizing piece of work. What about Cranston? He’s a victim of a caricatured character. We rarely feel as if we ever truly get to know him or the people closest to him. It felt like trying to enjoy a good meal on a plate under a locked glass box. It looks great, but there’s no smell, and licking the glass only gets you so far.

Roach and team finally manage to find the right tone around the 90-minute mark and deliver a final act that raises the bar significantly. It’s a technically solid film that does have its moments. What it doesn’t have and needed most of all is Trumbo as its screenwriter. 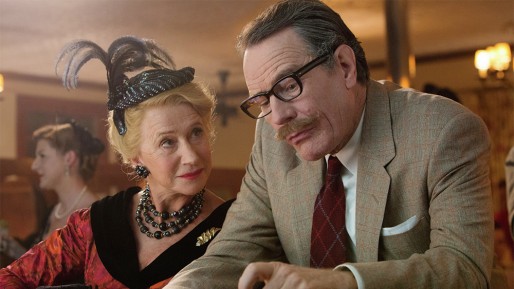