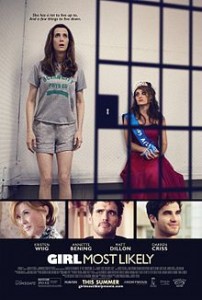 Kristen Wiig stars as a woman whose entire life comes crashing down, forcing her to move back home and confront the genesis of her problems in Girl Most Likely.

Imogene (Wiig) used to be on the path to sure success as a playwright. Now, years later, she’s living in the aftermath of having never actually lived up to the expectations. Everything’s a mess. In addition to losing her job and boyfriend, she’s also about to lose her New York apartment. The only solution, it seems, is to fake a suicide in a desperate cry for attention. When the plan backfires, she’s forced to move back home with her selfish, gambling-addicted mother (Annette Bening) and her mentally quirky brother (Christopher Fitzgerald).

There she finds her mother living with a strange guy (Matt Dillon) who claims to be, among other outlandish assertions, a secret agent. Adding insult to injury, her mother’s rented out Imogene’s old room to a twentysomething boarder (Darren Criss).

A dictionary is filled with a plethora of words. I suspect that if you look long enough you’ll find a few sequential entries that oddly form a cohesive comment or statement. That would be an improvement over this script. 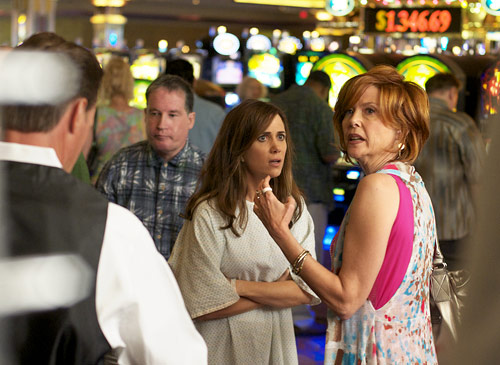 This is a droll, tedious disaster. Nothing in it works. If it’s a comedy, it’s a dark one without much in the way of laughs. As a drama, it’s entirely ludicrous. It doesn’t even reach the low rung of campiness. Airlines should show this as a sleep aid during flights. I fear that even the inevitable disc version may represent cruel and unusual punishment for the hardware subjugated to play it.

The characters are all over the place. They go from one extreme to another as if it’s the most normal thing in the world. The mother is disconnected one moment and nurturing the next. The brother is a moron and then a savant. Don’t even get me started with Dillon’s crazy character and the way he progresses.

Even Ocean City, New Jersey, isn’t spared. That’s where Imogene’s mother lives, so much of the film supposedly takes place there. I spend much of my summer in Ocean City, and this isn’t it. We get some flyover shots of both it and Atlantic City, but the close-up scenes all look like they were done elsewhere. The real damage comes from the script which portrays the town and its residents as a joke for no good reason.

Okay, so not everything is a complete loss. Fitzgerald, as the brother, does a nice job where possible. The soundtrack has a song or two that works, and it’s not a two-hour film. That’s about it.

Everyone would have been better off if Imogene overdosed during her fake suicide. That way, the film ends at its peak, and we get back an hour of otherwise wasted time.