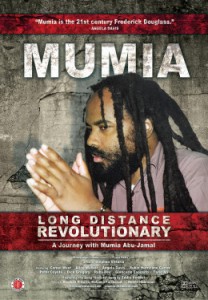 “Kill Mumia now!” That’s what I yelled at the Free Mumia Now crowds outside City Hall in Philadelphia some years ago. I just happened to be driving by one day when I didn’t expect the rally and would have otherwise avoided the area. If you’re from the Philadelphia area, you heard about Mumia Abu-Jamal at some point. Convicted of murdering Philadelphia Police Officer Daniel Faulkner in 1981, Abu-Jamal may just be Pennsylvania’s most notorious and/or famous prisoner. His supporters turned him into a legend of sorts, and I hate to see such homage and tax dollars wasted on a killer — an unrepentant death row inmate to boot. I wished that he would just go away, so I was disgusted to see all of these misguided disciples screaming for his release as if he were innocent.

I was conflicted when I saw the trailer for Long Distance Revolutionary: A Journey with Mumia Abu-Jamal. Here’s a film that seemed to lionize Abu-Jamal as if he were the second coming of Christ. Could I see the movie and review it objectively? That was the challenge. I am clearly biased against Abu-Jamal, so the goal was to watch the film and write about it as if I had never heard about Abu-Jamal before. I felt up to the challenge because I was able to mentally separate Roman Polanski the man from Roman Polanski the director when I watched his latest films. Polanski is a despicable coward who fled the country after drugging and raping a 13-year-old girl, but he also happens to be a great filmmaker. The Pianist took me on a roller coaster ride of emotions, The Ghost Writer surprised me and Carnage made me laugh often. Like Polanski, I find Abu-Jamal to be pompous and cowardly. I needed to separate my feelings for the man from my response to the documentary. I was able to do that, and the film suffers from the same problems whether you are for or against Abu-Jamal.

The biggest problem with Long Distance Revolutionary is revealed by its subtitle. Writer/director Stephen Vittoria approaches Abu-Jamal almost as a participant in the formulation of the film rather than just the subject. Without that objectivity, the film goes far beyond the bias that’s typical of a documentarian to almost acting as a mouthpiece for the subject. Since Abu-Jamal appears to have exceptional freedoms in prison by publishing books and even conducting college classes by phone, let him make his own movie in a prison studio rather than have a purported filmmaker cull together some clips and spout his beliefs.

If you’re going to put together a documentary about Abu-Jamal, it must cover his past as well as the circumstances of the criminal case that brought him to prominence. I did learn a bit more about Abu-Jamal — born Wesley Cook before he abandoned his “slave name” — and his early career as a promising black journalist. Abu-Jamal rose to prominence in radio, and it’s clear that he has a nice speaking voice, which perhaps is what draws so many to listen to him even now. Even some of the interviewees who are fans of his explain that Abu-Jamal limited himself in his journalistic endeavors because of his concern to only cover racial issues and his radicalization that drove him to join the Black Panthers following a beating by police.

Although there are clips, images and footage related to Abu-Jamal, it is largely a “talking heads” documentary with a variety of Abu-Jamal friends and supporters saying how great he is. If he’s such a great man, what is he doing in prison to begin with? There seems to be blame placed on the police and others, but Abu-Jamal himself and the interview subjects gloss over the events that put Abu-Jamal in jail. This is another major flaw of the film. Vittoria almost entirely avoids the murder, trial and sentence of Abu-Jamal except for a passing mention. Abu-Jamal was on death row until his sentence was changed to life in prison on appeal, but a new trial was never considered. It was clearly not on the agenda of Vittoria to say anything negative about Abu-Jamal at all. Instead, he includes clips with a smiling Abu-Jamal talking about how corrupt the police department is. Neither Vittoria nor Abu-Jamal in interviews disputes the sentence; that’s because they both know that this was murder in cold blood and that any mention of it dims Abu-Jamal’s star.

The parade of positive comments from the interview subjects gets tiresome. This group includes Pam Africa, Tariq Ali, Peter Coyote, Giancarlo Esposito, Alice Walker, Dick Gregory, Amy Goodman, Ruby Dee and Rubin “Hurricane” Carter. Angela Davis has gone on record with the most ridiculous comparison by branding Abu-Jamal the “21st Century Frederick Douglass.” I wonder how many of these people would stand behind Abu-Jamal if he wasn’t educated, well spoken or published like most other death row inmates or lifers. Princeton professor Cornel West comes off as the biggest fool out of the bunch. He crosses the line of racism many times and even makes a blatantly preposterous comment by saying that Oprah Winfrey does nothing to help poor people. Really?! I can recall only one detractor in the film, and that’s Joey Vento, the deceased owner of Geno’s Steaks who got in hot water when he put up a sign at his restaurant directing people to speak English when ordering. Vento offers to push the button to execute Abu-Jamal if nobody else wants to do it.

A more balanced approach to the man and his story would have served Abu-Jamal better than this puff piece. Most reviewers have to point out the major flaws if they’re being honest. Vittoria is not a bad filmmaker. His techniques are familiar but not boring, and he even includes the song “Society” by noted human rights advocate and Pearl Jam lead singer Eddie Vedder. After watching the TV series The Following, I find similarities to the followers in that show and Abu-Jamal’s supporters: they blindly trail someone with no question about the bad things he does and, in collusion, work to defend this person and his beliefs. I need to update the chant I yelled out of my car window those years ago. Given the flawed approach of Long Distance Revolutionary and the relentless churn of the Abu-Jamal propaganda machine — each of which treats Abu-Jamal like a saint without a past rather than a sinner who should show remorse — I should instead ask you to “Ignore Mumia Now.”