Calvin Weir-Fields (played by Paul Dano) is potentially America’s next great literary wonder. He had the fortune (or misfortune depending on your perspective) of writing a beloved book with his first effort out of the gate at 19 years old. Now, several years later, he’s stuck with a seemingly endless case of writer’s block while everyone around him waits for him to finish his next great work.

Calvin is ill-prepared for the world as it now sees him. In real life he’s introverted, shy and critical of everyone. These traits work against him as the world tries to pull every which way and to glom onto his success at every turn. With no other options he turns to a therapist (Elliot Gould who’s been away from the screen for too long) who suggests he take a baby step and write just a single, bad, page. 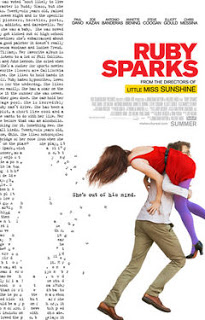 That night Calvin has a dream about a girl who’s absolutely perfect for him. Drawn to the narrative he can’t wait to return to sleep each night to continue the experience. He begins to write about the girl named Ruby Sparks (Zoe Kazan)—in full detail—night after night (Kazan is also the writer of the original screenplay).

It’s then that the story takes a turn that’s both the most intriguing and most frustrating part of the story. One morning, late for a meeting with his agent, he laments that his dog needs to be walked when, out of nowhere, a female voice rings out telling Calvin that she’ll walk the dog. It’s Ruby, inexplicably alive from the pages of his imagination, in all her perfect glory.

The journey from this point demands a complete suspension of disbelief. If you look too closely for cracks you’re going to find them. Just go along for the ride.

The story now shifts into what this all means for Calvin. He cannot believe his luck. The girl of his dreams—perhaps the only girl that could possibly be for him—has sprung to life and wants nothing more than to be his everything. At least that’s how it seems for a little while. As they say, be careful what you wish for because you may not like it once you get it.

The film starts out as one filled with promise and intrigue. It holds that allure for about half the movie when the cracks really start to multiply and the plot begins to slow. Thankfully it more or less rights itself in a scene where all the cards have to be laid on the table but in a way that may disturb many viewers. It fits the plot but it might be hard to watch for some.

This is a film that will get everyone talking about it after seeing it. We kept trying to find a message in it but, then again, maybe there isn’t one. I’m just not sure. I can’t say I dislike it but I also can’t say I enjoyed it either. It’s funny at times, cute at others and dark as well. However, what it doesn’t feel like is a complete story.