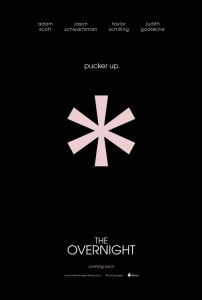 An innocent evening between new neighbors evolves into something beyond one of the couple’s wildest expectations in The Overnight.

Almost every couple has been there. You find yourself desperate to meet new people and hoping to finding a lasting friendship. That desperation can sometimes lead you into some potentially compromising situations. Vanilla couple Alex (Adam Scott) and Emily (Taylor Schilling) just relocated into a new neighborhood with their young son. They’d love nothing more than to find another family with whom to hang out. One day at the local playground, they meet Kurt (Jason Schwartzman), the strange but curiously fascinating father of a boy whom their son quickly befriended. Kurt puts on the hard press, and the young couple reluctantly accepts an invitation to spend an evening with Kurt’s family, including his gregarious spouse Charlotte (Judith Godrèche).

As the night wears on, Alex and Emily find themselves both literally and figuratively in the deep end of a pool without ever intending to get wet. The conversation becomes ever more bizarre, pushing them both to the very edge of their comfort levels. Nothing that they’ve ever experienced has prepared them for this entirely unexpected, wholly bewildering but oddly magnetic evening.

This slow-burn dark comedy takes us on a titillating ride very much like the one its primary couple experiences. Initially, we’re not all that sure about the film, but we can’t help being captivated by it. Every awkward step they take, we take with them. Their interactions feel eerily and uncomfortably realistic. Time and again, we’re certain that we’ve reached the nadir of our mutual suffering, only to realize just how wrong we could be. This is not a film for the faint of heart. Its story line will compel anyone with a hint of prudishness to run hastily for the closest possible exit long before it’s really even getting started.

Writer/director Patrick Brice deserves immense praise for his deft handling of such challenging material. This could have easily gone entirely wrong. The acting is absolutely superb. Scott and Schilling portray the trusting conservative couple in a way that makes them entirely relatable. Schwartzman and Godrèche are spot on as the potentially manipulative power couple. As a foursome, the group only gets better with each turn of the proverbial screw. If the person next to you isn’t squirming in their seat, check them for a pulse.

There are times where The Overnight pushes the boundaries a bit beyond believability, but just sit back and let it happen. You know you want it. 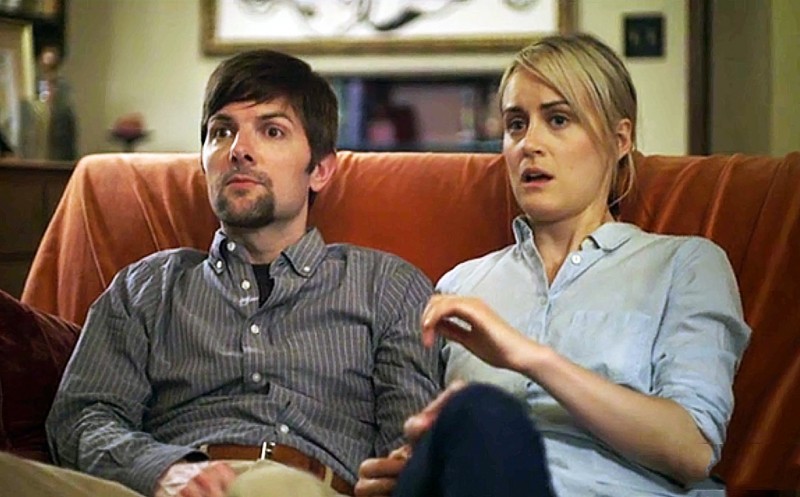