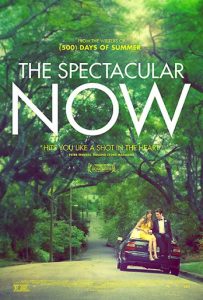 A streetwise, charismatic teen unintentionally falls for a good-hearted, introverted girl who teaches him a thing or two about young love in The Spectacular Now.

John Lennon‘s solo hit, “Beautiful Boy,” includes the lyric, “Life is what happens when you’re busy making other plans.” Those words perfectly encapsulate the overriding theme of the latest romantic epic from Scott Neustadter and Michael H. Weber, who last brought us the touching hit (500) Days of Summer. While every preview mentions this connection, the two films are quite distinct in their approach and style.

Sutter Keely (Miles Teller) is a senior without a set future. He’s suave on the surface but deeply troubled underneath his slick exterior. One night, after a crazy bender, he’s woken up on a strange lawn by a girl who looks vaguely familiar named Aimee (Shailene Woodley). She reminds him that they’re in the same class and asks if he’s okay.

That awkward introduction is the errant spark igniting a brilliant flame. The flame draws them both like moths — unable to veer from its pull. The two spend the final weeks of school and the summer break experimenting with the realities of falling in love. Their budding relationship is complicated not only by their obvious differences but also by Sutter’s nearsighted lust for his ex-girlfriend Cassidy (Brie Larson).

The film is shot in flawless fashion while utilizing a very grainy look that gives it a realistic hard edge. Their tale, while at times disarmingly adorable, is also constantly shadowed by a dark cloud that never lets the audience take more than the shortest of breaths. In ways, this is very much this generation’s Love Story.

No other film so far this year has touched me as deeply as this one has. Every moment is precious and enveloped by a realism that’s very rare. We all know a Sutter and Aimee, and we can’t help but pull for them while, at the same time, knowing theirs is a path that’s full of hard lessons. It’s uncomfortably wonderful.

The acting is superb. Teller and Woodley dominate the screen while the supporting cast, including Jennifer Jason Leigh and Kyle Chandler, does a terrific job as well.

I do feel the film could have resonated even more with a solid soundtrack or, for that matter, any soundtrack because there’s almost none to be found here. There’s also a misstep with a single scene where the director chose to go for shock value. It just sticks out like a sore thumb on a hand model.

None of that matters because it’s all wound together by a winning script, wonderful performances and a perfect ending for anyone with a romantic bone in their body. The Spectacular Now is spectacular and playing now.