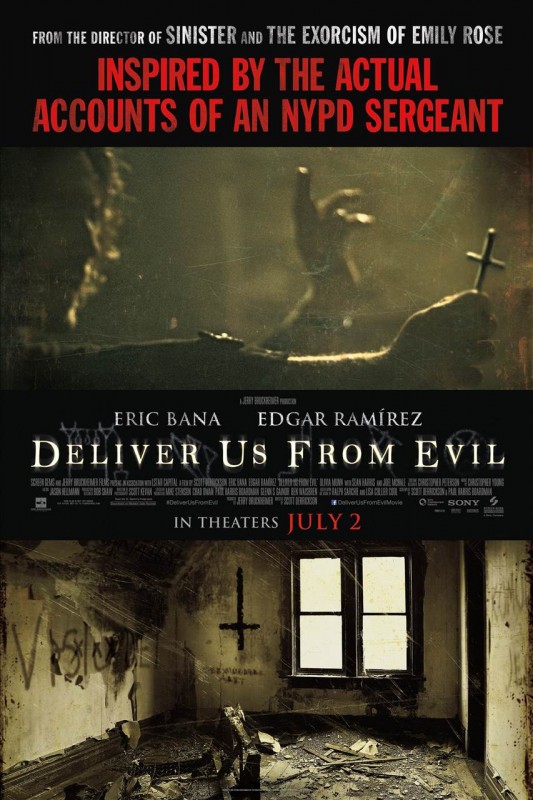 Possessed individuals and their exorcisms resurface every now and then in the horror genre. For many reasons, nothing tops The Exorcist for me. It was so expertly done — even for its time — that it tapped into the primal fear of evil and added simple special effects for a chilling experience that has not been matched since. I was skeptical when I heard about Deliver Us from Evil and saw the trailer. From first impressions, it’s another horror film in which spooky stuff happens and evil spirits are the source of the occurrences. The marketing campaign really does this film a huge disservice. Deliver Us from Evil instead plays out like a police procedural or a detective show in which the lead character accepts and is open to the supernatural but investigates cases that plunge into the depths of depravity in human beings.

The tagline on the poster states, “Inspired by the Actual Accounts of an NYPD Sergeant.” Such statements or any “inspired by” or “based on the true story” lead-ins raise my hackles because they’re almost always a cheap way to ditch the banality or ordinariness of the real tales and add in imagined movie-worthy sequences or characters. Deliver Us from Evil is based on the 2001 memoir called Beware the Night, now rereleased under the movie’s title, by retired NYPD Sergeant Ralph Sarchie and cowriter Lisa Collier Cool in which Sarchie details his cases that involve possessions and evil spirits. Such material is in good hands with cowriter/director Scott Derrickson (cowriter/director of Sinister and director of the remake of The Day the Earth Stood Still) and cowriter Paul Harris Boardman (cowriter of Devil’s Knot). They previously worked together in those roles on 2000’s Hellraiser: Inferno and, more importantly, 2005’s The Exorcism of Emily Rose, one of the better possession movies of recent years. The filmmakers’ background in genre films helps them with those angles and sequences of this movie, but it’s ultimately the balance between the spooky stuff and the solid police work that keeps you interested throughout.

A brief prologue in Iraq in 2010 shows three soldiers — Jimmy (Chris Coy), Santino (Sean Harris) and Lt. Griggs (Scott Johnsen) — encountering something that scares them in an underground chamber. The rest of the film takes place in 2013 in the South Bronx as Sergeant Ralph Sarchie (Eric Bana) and partner Butler (Joel McHale) investigate a series of crimes that start with Jimmy brutally beating his wife. Additional cases involve the other soldiers and how they may have been affected by what they encountered in Iraq. When a disturbed woman named Jane (Olivia Horton) throws her child into a pit at the zoo, a priest named Carlos Mendoza (Edgar Ramírez) steps in to counsel Jane and assist Sarchie with his work. It turns out that Mendoza has a knack for dealing with cases of possession, and Sarchie’s investigations are heading in that direction. What’s important is that the movie craftily walks the fine line between a full-on supernatural experience and open-minded policemen who aren’t sure whether there are demons involved or not. This distinction grounds the events in reality; the believability keeps the horrific scenes all that more intense.

Great acting all around makes a strong difference for Deliver Us from Evil and elevates it above standard fare. Bana is convincing with his New York accent, and the jokey McHale makes you believe that he can handle himself with a knife. I’m not sure that I buy Ramírez’s worldly priest Mendoza. That’s more an issue with the character than Ramírez. Olivia Munn (The Newsroom) as Sarchie’s wife Jen and Lulu Wilson as his daughter Christina don’t have a lot to do other than look scared or hurt in response to some inexplicable events. Horton and Harris completely dominate their scenes, especially as they become more physically demanding. 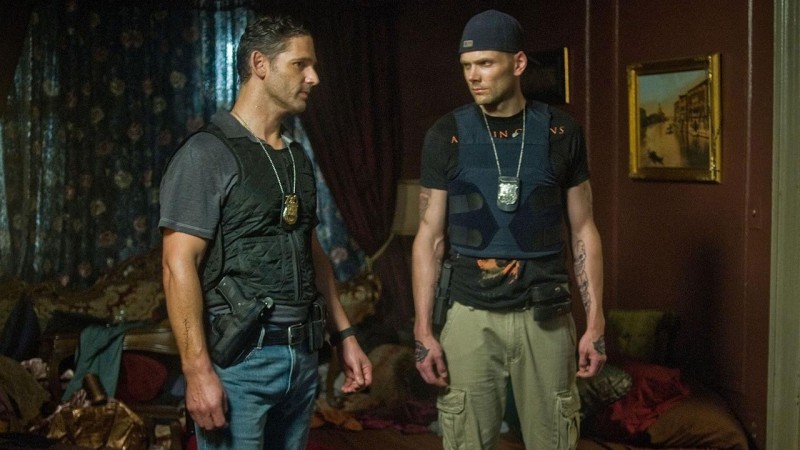 The special effects are gritty, bloody and unsettling, just like you would expect in a cop show. Dead bodies just aren’t pretty, and wounds from slashes and other attacks are messy. I like that the effects don’t go overboard and that things that people see or experience might just be a trick of the light or their minds. As seen in the trailer, did that stuffed owl really roll across the floor and make sounds on its own, or did the little girl imagine it? As far as makeup effects, Horton and Harris sport plenty of prosthetics and goopy, drippy stuff. They really make the most of it and their characters’ madness. Although possession is an element of the movie, it’s not the focus, so the special effects are mostly used in a few key scenes. The film could have very easily gone down the path where so many in the horror genre go, which is to layer it with plenty of frightening images and fake scares. Fortunately, it takes the higher ground.

It’s hard to tell whether the real-world Sarchie simply believed strongly in the events that he wrote down or if there is also other evidence of the demonic at work in his cases. This adaptation retains that approach of leaving the doors open to both possibilities and layers it with details like the multiple references to songs by The Doors. I’d love for directors to not use a screeching cat to cause audiences to jump; Derrickson makes up for it with some creepy scenes in a darkened Bronx Zoo. The title really hurts more than it helps. With a feel more like Se7en or The Silence of the Lambs, including some containment cell segments as in the latter, Deliver Us from Evil takes the demonic possession subgenre and bends it over backwards into a more substantial experience.