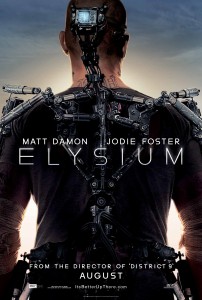 On a devastated futuristic Earth, an ordinary man’s dream to cross the literal divide between classes comes to the forefront in Elysium.

Matt Damon stars as the ordinary man, Max Da Costa, who grew up in the early 22nd century on an Earth that’s overpopulated, unhealthy and dangerous. It’s so bad that the richest populace abandoned it for the Nirvana of an orbiting space station that looks like a re-creation of a futuristic Martha’s Vineyard called Elysium. On the station, everyone’s beautiful, healthy and opulently rich. Everyone back on Earth is, by comparison, worn, sickly and dirt poor. Of course, the two sides despise one another, with everyone on Earth hoping to find any way to get up to Elysium and everyone on Elysium trying to do just about anything to keep the rabble out of sight and mind. It’s rather reminiscent of the current battle over illegal immigration.

It has the immediate feel of Waterworld mixed with Oblivion and just a dash of The Terminator.

This is the latest in a seemingly endless list of sci-fi action films this year. The action is first rate, which means it often looks incredible, but like the others, the story just can’t match the effects. The biggest problem is that we just don’t really care at all for any of the characters. Damon’s Max is a small-time hood lacking anything the audience can empathise with short of an out-of-reach dream to be one of the lucky elites. Then we have Jodie Foster and Sharlto Copley playing, respectively, a top government official named Secretary Delacourt and her for-hire mercenary named Kruger. They’re both just despicable people with distractingly unnecessary accents. 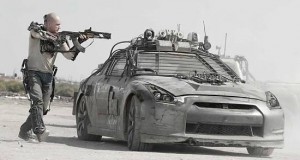 The plot itself is unimaginative at best and downright silly at worst. You’ll lose count of the number of times that totally unlikely events happen at just the right moments for them to succeed. Everything is just unrealistically in sync. The score is entirely forgettable, although it does try here and there to break through. (It fails.)

The tech is entirely over the top. Things are just completely unbelievable and often head scratching as in one scene where a major character dies and we see a graphic overlay denoting their death but have no idea where that screen supposedly exists. Just when you think it can’t get any sillier, along comes the tech that transforms the film into a bad comic book experience. The solid action sequences and excellent pool of talent can’t drag this film out of its lower class.