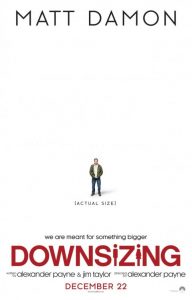 A cash-strapped couple hopes to increase their happiness by reducing their stature in Downsizing.

Paul Safranek (Matt Damon) and his wife Audrey (Kristen Wiig) want more from life. Their mundane jobs and low-reward lifestyle have left them depressed and desperate for change. The answer is a novel technological breakthrough — downsizing. This radical new solution to overpopulation reduces humans down to roughly 5″ and, in the process, not only decreases their impact on the planet, but also turns their meager savings into a comparatively-sized fortune. One burger for a typical human can feed an entire city of downsized people. The only catch — there’s always a catch — is that the process is entirely irreversible. You know what they say: “Once you go small…”

There’s a classic joke from Steve Martin‘s stand-up days about a new designer drug that makes you small. If you get pulled over by the cops, they have a way of telling if you’re small. They give you the balloon test. If you can get inside the balloon, they know that you’re small. Now, that’s funny. What isn’t funny is this movie.

You know that a film had major issues when its trailer’s most intriguing scenes aren’t in the finished product. It seems evident that everyone thought that this thing was supposed to be a comedy except writer/director Alexander Payne. He should know better. His work includes some real gems, including The Descendants, Sideways and Election. While each of those films has dark overtones, they all succeed because of their more pronounced lighter moments. On the other hand, this film provides almost nothing to laugh at. What we get instead is a drawn-out reminder of “the grass is always greener” syndrome and a sermon about the perils of global warming. Hilarious!

The only things not small in this misguided misstep are the two things that should have been — its laborious length (2h 15m) and the in-your-face ad placements for a mail-order steak company. At least somebody made some money off this mess. The film’s most memorable element is also a mixed bag. Damon’s character befriends a displaced Vietnamese cleaning woman (Hong Chau). Her performance is oddly both the best and worst thing about the movie. She gets all of the best lines (those few here to be had), but delivers them with an accent so distracting that we can barely decipher what she’s saying.

This small film with minuscule self-awareness provides little in the way of entertainment. In keeping with the theme, it fully earns its downsized rating. 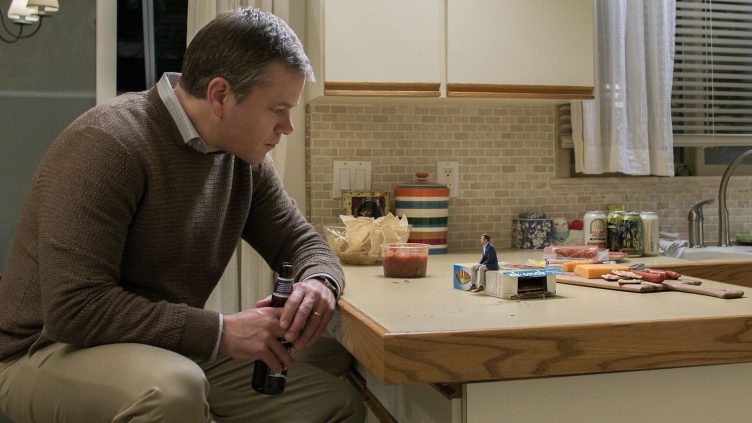