Denzel Washington stars in a new film as a heroic but troubled airline captain in Flight. This is a film that manages to effectively blend a first-rate thriller and a compelling drama into one fluid story line that will have most viewers glued to the edge of their seats throughout.

The film really takes place in two parts—the story leading up to a stunningly harrowing and realistic crash (one of the two best I’ve ever seen) and then the aftermath and ramifications that follow the incident itself. 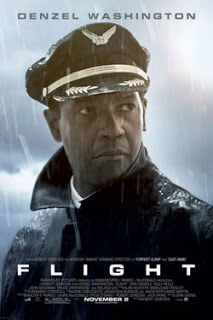 From the very first frames of the film you realize this is a Denzel Washington we don’t see often. We get the suave ladies man we’ve seen before but with a deeply troubled soul. Whip (Washington) is dealing with the harsh realities in his life by drinking and using drugs far too much. On the day of the crash he’s had virtually no sleep and was clearly drunk—and then some. What’s most striking about the movie (and his portrayal) is how this situation gets under your skin. You spend much of the experience twisted in knots over the innate desire to want to show sympathy for his character while, at the same time, realizing he’s his own worst enemy. Viewers continually gasped loudly at each misstep even when those mistakes were clearly telegraphed in advance. You knew the wreck was inevitable but still couldn’t bring yourself to believe it would really happen.

This is a very realistic movie in many ways except, perhaps, in the final choice made by Whip. I fear most people would have gone in another direction but that’s nit-picking. There’s one scene in particular that resonates with me long after seeing it. Whip seeks out his head flight attendant (who points out that she’s truly known him for 11 years) to feel out what she’s planning to tell the NTSB (the real governmental agency charged with investigating any airline crash). I cringed watching it knowing that everything he said was very likely exactly the way it would go down if this happened in real life. He’s driven to look for any crack of light to escape the vise. She has the weight of her realization that this man is probably the only reason she’s still alive but does that make lying for him justifiable?

I love a film that forces you to ask hard questions and Flight is one such film. It’s not a perfect story. Some elements don’t ring true but, as I said, most do—and very much so. I spent quite a bit of time thinking about the full implications of the actions presented in film. For example, would Whip have been more or less effective in the crash without the alcohol? Perhaps it allowed him to remain calm when anyone else would have been paralyzed with fear or too hyper to choose the bold solution that saved lives. How can we ever be sure? The easy answer is clearly to just say it’s always best to be sober but is that the honest and accurate answer in this case? I really don’t know.

The cast is also excellent across the board. Most notable among them is Don Cheadle playing a very quirky but brilliant lawyer and John Goodman playing a character whose origins aren’t fully explained or explored. You won’t care as every time he’s on screen you’re in for a roller coaster ride. Just sit back and enjoy.

And of course there’s Washington who could very easily pull off a nomination for his efforts. I can’t really think of another actor who could manage to so seamlessly embody every facet of this complex role the way he does here.

Flight is a film that will have a lasting impact for anyone that sees it. That’s high praise for any film in my view.