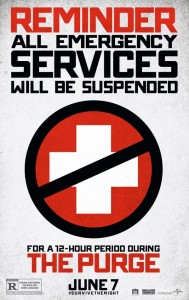 There are a few people whom I would kill if given an opportunity, but I’ll keep that to myself just in case the events of The Purge come to pass in another decade. Set in a dystopian future where America treats crime in an entirely different method, this movie tries hard to establish a premise and “rules” before it degenerates into just another slasher or killers-on-the-loose film. There has been much talk over the years about how people have become desensitized to violence because of movies, TV and video games. I don’t buy it. As we have seen in America over the previous weeks since the Boston bombings, we actually prefer to not have violence at all let alone the greater amount of violence that would result from such desensitization. The Purge might have been able to incite some thoughtful discussions had it expanded upon its premise and not limited the plot to one family’s story.

The Purge takes place in 2022 in a rich neighborhood, which is exactly where a predictable movie in this future would occur. The United States is a place where unemployment is at 1% and a reduction in crime is attributed to an event called The Annual Purge in which all crime is legal for 12 hours and emergency services are suspended. People walk around talking about patriotism in participating or supporting this night and say things like “safe night” or “release the beast” in the parlance of the event. Writer/director James DeMonaco (also writer of the remake of Assault on Precinct 13) almost completely squanders his idea by focusing on violent attacks and murder rather than any number of other crimes that would be allowed on this night. The film is a feeble attempt at social commentary when it is nothing more than a horror film with window dressing in order to hook moviegoers.

The Sandin family is hunkering down for the night, and it appears just like any other night at home for dinner. James Sandin (Ethan Hawke) sells security systems for well-off families, and he has coincidentally sold his services to most of the families in the neighborhood. Mary Sandin (Lena Headey) is a typical housewife and loving mother. The two kids each have their issues. Charlie Sandin (Max Burkholder) is withdrawn and likes to observe the rest of the family with his mutant-baby robot named Timmy that looks like something straight out of the Toy Story movies. Zoey Sandin (Adelaide Kane) is a rebellious teen who feels disdain for her parents and something approaching love for her boyfriend Henry (Tony Oller). Once James locks down the house, including steel shutters that cover the doors and windows, things get tense when Henry surfaces after hiding in Zoey’s bedroom and doofus Charlie opens up the door to let in a bloody veteran (Edwin Hodge) begging to get into the house to avoid a rampaging mob.

Everything reaches a new level when preppy young adults in masks, led by a snarky blonde (Rhys Wakefield), threaten to break in unless the family releases the veteran. Even if you haven’t seen the trailer, you know that these thugs will get in the house and terrorize the family. Without that event, there really is no movie. This is just another in an endless line of movies — The Purge is eerily similar to the recent remake of Straw Dogs — in which killers stalk people in a house. The movie fell apart for me for so many reasons. I can only talk about a few of them without giving away plot points. In particular, this supposed fortress against people out for mischief and mayhem is entered so easily that I don’t see the point of security systems. Even worse, wouldn’t security expert James keep the codes out of the hands of his irresponsible kids?! It’s maddening and annoying that Charlie could so easily let in a stranger on a night when the rules of “stranger danger” are more important than ever.

The Purge doesn’t even work as a horror movie. It hits just about every horror movie cliché in the books from the stalkers suddenly knowing the house better than the family who lives in it to the old standby when someone opens a refrigerator door and closes it to reveal a person who magically appears that quickly. The latter is usually one of the biggest omens of a bad movie. Fortunately, The Purge is quite short and even pads the running time with a slow credits crawl. If I had a night like this every year, I wouldn’t concentrate on killing other people. I would band together with some others and figure out how to break into banks. DeMonaco’s novel idea could have been so much better or more interesting had he actually spent a few minutes thinking up creative plots that fit the premise. Instead, the result is a movie where Hawke’s character stays up all night and encounters a situation that will change his life forever. The better version of that scenario is called Before Sunrise.