A self-centered, attention-seeking podcaster is abducted by a demented psychopath determined to recreate an encounter from his past in Tusk.

Wallace Bryton (Justin Long) is the star of a recently successful podcast along with his partner, Teddy Craft (Haley Joel Osment). The two are notorious for their offbeat, often offensive “comedic” style, usually achieved at the expense of less fortunate dupes. A major interview in Canada beckons Wallace north but falls through unexpectedly once he arrives. Far from home and desperate for material, his eye catches a curious billboard flyer that promises a plethora of amazing, true-life tales told by the man who lived them. Wallace jumps at the opportunity and arranges a meeting with its poster — a curious, erudite fellow named Howard Howe (Michael Parks).

Howard’s stately manor house is nestled deep in the woods, hours from the nearest city and tucked ominously behind a vintage perimeter fence. Distracted by his own self-interests, Wallace notices only the biting cold, gladly accepting a timely cup of hot tea from his gracious host. Howard is everything that Wallace hoped he would be. He’s eccentric, quirky and utterly captivating. His most intriguing tale involves a strange fascination with a walrus he refers to as Mr. Tusk. The stories are certain to impress any audience — that is, if Wallace can just manage to stay awake long enough to… 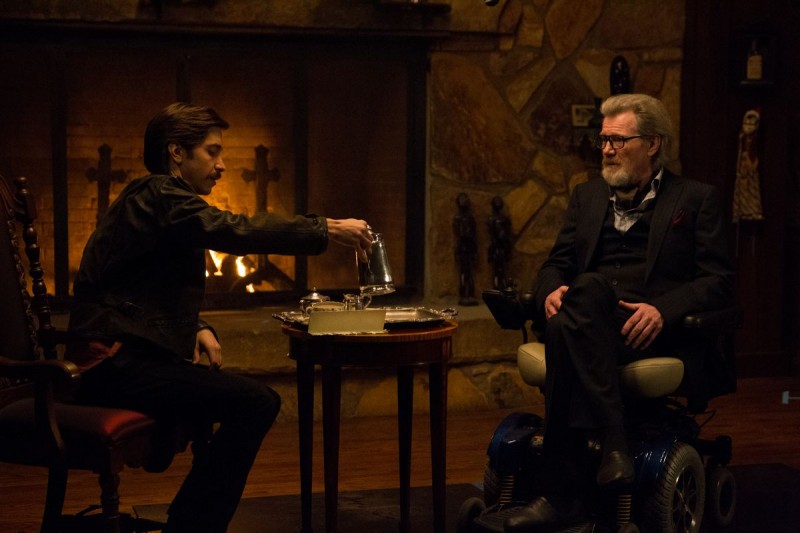 For fans, all I need to say is “This is a Kevin Smith film,” and the rest is entirely superfluous. Smith converts will see anything he aims the camera at and deems worthy of calling a film. However, like most of the rest of humanity, I struggle to see the allure. His current film is part horror, part drama, part comedy and almost entirely a mess.

Parks is the clear star of the show. He owns every scene while unintentionally, I think, channeling Brian Cranston‘s Breaking Bad persona both mentally and physically. It’s probably just the telltale glasses. The rest of the cast members are mainly throwaways, which isn’t intended as an insult to them but just a reality of the script. Worst affected is Genesis Rodriguez. She plays Wallace’s long-suffering girlfriend Ally. She’s not only a casting mismatch, but Ally’s actions are so contradictory from one scene to the next that you’d swear she’s suffering from advanced dementia.

The biggest problem with the film is that it really doesn’t deliver in any of the three genres it lays claim to. It’s not funny or interesting; that just leaves horror. It’s not a scary film by any means. It is graphic and, in many ways, very disturbing, but even that’s muddled by the ridiculousness of it all. Smith even gives us a surprise marker for when it all jumps the shark. A major unbilled cameo shows up playing an incredibly distracting detective named Guy Lapointe. As soon as he appears, abandon all hope for the film.