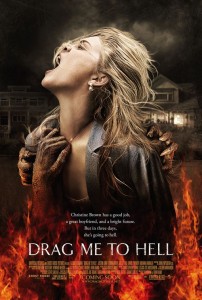 The career of Sam Raimi has been filled with films that impress all types of audiences. His big directorial break came in 1981 with the release of The Evil Dead. He solidified his reputation as a horror master with 1992s Army of Darkness—a film so perfectly mixed with horror and comedy that it set itself apart.

He won me over with 1998s flawless drama/thriller A Simple Plan. He then did the impossible showing that Keanu Reeves could act in 2000s The Gift.

It was then that he went to a whole new level taking on the mantle of the three Spider-Man movies. I figured we’d seen the last of his early horror movie excursions. It came as a surprise when I then heard that he’d just directed the well-received horror film Drag Me to Hell. Here’s a horror movie that, unlike nearly all horror movies, was holding a mid-90s rating on Rotten Tomatoes including a mid-80s score from the industry’s top critics. I haven’t seen that sort of praise in a long time for this sort of film.

The opening scene gave me a bit of concern for the movie as it seemed like something totally disconnected from past projects. It was like a confused B-movie for a bit and then it got rolling. Drag Me To Hell is, without a doubt, a horror film. It has the whole of the theater sitting on the edge of its seat with much biting of nails. However, much like Army of Darkness, it never takes itself too seriously and lets off the steam here and there with very jittery laughter.

The story isn’t very deep but it is quite effective in its simplicity. I should also tell you to be prepared for just about any plot turn and to just go with it. Also pay special attention near the end as the final sequence, though perfectly delivered, was a bit confusing for several audience members who’d missed a key sequence moments before.

This film won’t win any major awards and it’ll have a hard time gaining audience with all the major films around it but it is worth seeing if you like this sort of movie. I can’t put it in the same league as Army of Darkness and struggle to see it as deserving of a mid-90s rating but a mid-80s rating is a good fit. I would avoid it like the plague if gore is something you don’t appreciate. It is, after all, called Drag Me To Hell.