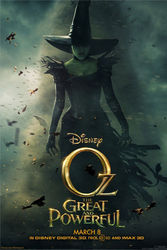 You’ve all heard the expression “If it looks like a duck, walks like a duck and quacks like a duck, it’s a duck.” I would say that it’s true in most cases. Oz The Great and Powerful may just be that exception. With the word “Oz” in its title, a structure much like the classic film The Wizard of Oz and any other number of similarities, you might expect that it rises to the challenge of its pedigree. Alas, that’s not the case. It’s more like a chicken than a duck. The fantasy film has a lot to offer in a grand experiment by director Sam Raimi, but I would knock it down a bit from “great” and “powerful” to solidly good and somewhat strong.

Director Raimi and writers Mitchell Kapner (writer of The Whole Nine Yards) and David Lindsay-Abaire (writer of Rabbit Hole and Inkheart) work more from the books by L. Frank Baum than they do the 1939 film, which I must state is my favorite movie of all time. I have never read the books, but this modern retelling gives me the itch to do so because of the variety of locations and characters that were unfamiliar to me. In what could be described as a visual/structural ripoff but Raimi would probably mention as a homage to the earlier film, Oz The Great and Powerful opens with a black-and-white segment that takes place in our world in Kansas before it turns to the colorful scenery of Oz. Oscar “Oz” Diggs (James Franco) is a carnival magician and con man who sleeps his way around the carnival women and the guests until he gets caught by the strongman and goes on the run. His assistant Frank (Zach Braff) helps him escape into a balloon just as a giant twister descends upon the fairgrounds. You know where that twister will take him. Familiar faces in the carnival that show up as other characters in Oz are Michelle Williams — the real star or shining presence of the film instead of Franco — as Oz’s on-again off-again girlfriend Annie and a little girl in a wheelchair (Joey King) who wants Oz to perform real magic on her and make her walk. Ted Raimi (Sam’s brother) has a brief cameo as a guy in the audience who heckles Oz.

I think the purpose of the black-and-white segment is to introduce Oz and his Kansas relationships so that we can appreciate what happens in Oz. Instead, it made me dislike him because he’s such a smarmy kind of guy who takes from people instead of giving them anything other than cheap magical thrills. The film really kicks in after the balloon lands in Oz. Our hero initially meets the beautiful, alluring Theodora (Mila Kunis) and eventually ends up leading an army of Tinkers, Quadlings (farmer types) and Munchkins against Theodora and her sister Evanora (Rachel Weisz) — the two witches who have taken over the Emerald City and Oz. Along the way, Oz teams up with the Master Tinker (wonderful character actor Bill Cobbs), good witch Glinda (the positively radiant Williams), a helpful monkey in a bellboy’s outfit named Finley (voiced by Braff) and the porcelain China Girl (voiced by King), who serves as Oz’s Jiminy Cricket. As a huge fan of Raimi collaborator Bruce Campbell, I was excited to hear his voice before I saw him under heavy makeup as the Winkie Gate Keeper in a cameo. Campbell gets knocked about the head by Emerald City trumpeter/herald Knuck (little person Tony Cox of Bad Santa among many others) in a hilarious scene.

The film feels all too familiar, including scenes that involve poppy fields and Oz giving gifts to everyone for their efforts. I was prepared to hate this movie if there weren’t flying monkeys – my yardstick for Oz properties that I also applied to stage musical Wicked — and Raimi didn’t disappoint me. Finley is more like the monkeys in the Judy Garland vehicle whereas the flying beasts are nasty, fanged baboons. They will perhaps scare the little ones more than the 1939 monkeys frightened me when I was a kid. It’s a major plot point that one of the witches turns into the familiar green-skinned wicked witch. I won’t ruin it here for those who haven’t seen any press material. I was quite disappointed with the actress who turns green for two reasons: 1) the makeup is awful and makes her look chubby like one of the pigs in Angry Birds; and 2) she shrieks for the rest of the film to the point where her voice annoyed me at every turn from the overacting.

Oz The Great and Powerful is a visual treat more than anything else. The colors and textures of the landscape in the early Oz scenes are beautiful. The film looks like something right out of a fairy tale book. That rich look translates to the costumes and architecture of Oz with the wicked witch’s makeup as the only failure. The finale is a wonderful mixture of special effects, magic and heightened drama. You can see the money that Raimi spent on the film from the opening credits that hint at actors’ and filmmakers’ personalities and crafts respectively to the end credits against a green curtain to indicate the eventual sequel. I hate the rise of 3D in movies, but this is actually one of those films that employs it properly. Raimi was smart to visualize his movie in both 2D and 3D for the same response. For example, attacking baboons get a start out of you in either version, and the final scenes in Oz’s descending balloon are like one of those Disney simulator rides. The 3D just exaggerates the scenes and occasionally makes you feel like part of the action. Danny Elfman provides the jaunty score, and I’m so glad that it didn’t turn into a musical. The Munchkins have a brief, forgettable song, but they quickly stop singing. Mariah Carey sings “Almost Home” over the end credits, and it works as a song for that part of the movie.

I really wanted to like this movie more than I did, but I would be dishonest if I didn’t expose the flaws. I’m also a huge fan of magic, so it was nice to see that Lance Burton served as the magical consultant. Oz performs some simple tricks in Kansas and more elaborate illusions in Oz and the Emerald City. They’re a nice touch. Franco hams it up and smiles too much here, and he’s even worse in Spring Breakers. On the other hand, Williams just gets better and better – even in a throwaway part like this movie instead of her award-winning role in My Week with Marilyn. I actually do look forward to the sequel and hope that Raimi accents all of the good points of Oz The Great and Powerful. Give Cox and Campbell a rematch!