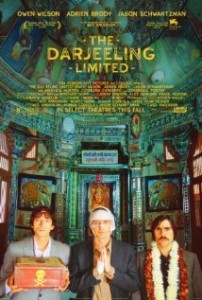 This is an extremely low-key, dark comedy that will not go over well with many though I enjoyed it quite a bit. The comedy is very similar to what you find in director Wes Anderson‘s other movie (that I feel is a classic), The Royal Tenenbaums.

The characters are extremely quirky and not very reminiscent of actual people. They’re not supposed to be. They’re troubled in deep ways stemming from a complicated background that has turned them into walking psychological studies.

The look of the movie is bleak but that too is very much part of the design. The camera angles and such are also very stark and different from the norm. Nothing about the movie is standard fare.

It starts off with a movie short that, initially, feels disconnected to the actual film but actually is listed as part one of the two parts (the second being the movie itself). This is called, “Hotel Chevalier”. I’m not sure why the movie was presented in this manner but it was. The ironic part of this short is that it has gotten some press for being presented as Natalie Portman‘s first on-screen nude scene. She’s been quoted as being regretful of the choice and has stated that it won’t happen again. What’s ironic is that there’s nothing here to see. You see an exposed backside and a few side shots with all parts hidden away and that’s it. If this is her idea of a nude scene expect to see her from here on out covered entirely by a thick blanket.

Anyway, it took a bit to not think about Owen Wilson’s real life suicide attempt while watching this as his character in the movie attempted it as well. After you get over that it just becomes another plot element and that’s it.

If you’re up for dark, low-key comedies then this is a good choice. If you’re not into them, avoid this movie at all costs as there’s nothing else here.