We saw the latest Pixar–Disney movie, WALL-E, this weekend. I caught it along with ten other family members and friends. 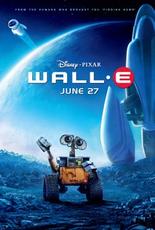 This is a movie, as I’ve mentioned before, I’ve been waiting on for a long time. A friend of mine over at THQ—a game publisher that had the rights to create all the games based on their movies—had mentioned the wonder of this film way back. He was when exposed to it long before the last Pixar movie, Ratatouille, came out. Because of the lead times necessary to get the games out around the release of the movie the developers get to see the concept in its earliest stages. He mentioned, that while Ratatouille was good, the next film, which he couldn’t say anything about, had blown everyone away. That turned out to be WALL-E.

The first sign of trouble came with all the pre-movie hype. Reviews were almost universally good. In fact, that’s a major understatement. The term “masterpiece” would come up time and again. I really didn’t want the raised expectations but it was pretty hard to miss all the coverage.

The first thing I noticed was that this film included no preview of their next film. It then was time to see the traditional pre-movie short. This one was about a magician and his starving rabbit. It was quite cute and funny but it didn’t have the same wow-factor that previous efforts had. I’m wondering if that’s due to the short itself or our getting used to the technology.

Once the movie began I was pretty taken with it. The main character is undeniably cute. You can’t help but identify with his situation and the loneliness of the world around him. It doesn’t matter that he’s just a machine. This is Disney and anything goes.

The movie is filled with memorable moments that I believe will stick with me long after the showing. The problem is that, for me, that’s pretty much what the movie comes down to. It’s a lot of moments strung together and turned out as a movie. Several scenes go on for too long. I found it interesting that, while I could connect with the two main characters in the film, all the other supporting cast generated very little interest. Pixar movies generally excel at fleshing out a wide variety of the cast but that somehow doesn’t happen here.

The look of the movie was typical Pixar. It looked great but it wasn’t anywhere near as visually impressive as Finding Nemo. WALL-E, the character, is simply lovable across the spectrum. I want one for my desk. Everything about the little guy is cute. The products division should have their hands filled producing related products for some time.

In the end I realized that WALL-E is a special movie. It’s sort of Pixar’s Fantasia. You can see the wonder of it but it just doesn’t compare to other films directly. It starts off with a bang and then runs out of gas trying to keep the “cute” aspect rolling. If I counted right, four of the eleven liked it to various degrees and the rest didn’t. That’s a much lower percentage than the reviews. For me I like it more than some Pixar efforts but not all of them. This is no Finding Nemo or Toy Story.