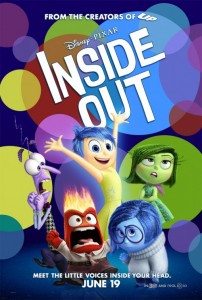 A young girl’s inner emotions struggle to cope with major change in Pixar‘s intriguing animated film Inside Out.

11-year-old Riley (voiced by Kaitlyn Dias) has lived a bit of a charmed existence up to this point in her young life. She’s popular with all of her friends, she’s a natural hockey player and she has two doting, loving parents. Her memories are filled with one precious, joy-filled moment after another. When her family relocates to the West Coast, it brings unwanted disruption and insecurity into Riley’s life for the first time.

This momentous turnabout plays with Riley’s psyche, evoking feelings far more complicated than any with which she’s ever had to wrestle. Deep inside her subconscious live the embodiment of each of her major emotions — Joy (Amy Poehler), Sadness (Phyllis Smith), Anger (Lewis Black), Fear (Bill Hader) and Disgust (Mindy Kaling). When combined, their unique concerns create a mind-set that keeps Riley healthy, happy and safe. You see, inside her psyche, these single-minded characters influence the outcome of each of Riley’s experiences. Every memory gets collected and preserved in different-colored, glass-like orbs. At the end of each day, they’re sent off into long-term memory storage. If Joy’s influence is strongest, a gold orb gets created. Sadness generates a blue one. Each has a distinct color.

Having been around with Riley the longest, Joy sees herself as the group’s leader and does everything in her power to make sure that most of Riley’s memories are the gold type. The innocence of tender youth has made that a fairly routine accomplishment. That’s no longer the case with Riley’s current challenging circumstances. Joy finds it increasingly more difficult to exert her will over the others, leaving Riley’s mental outlook entirely in question. 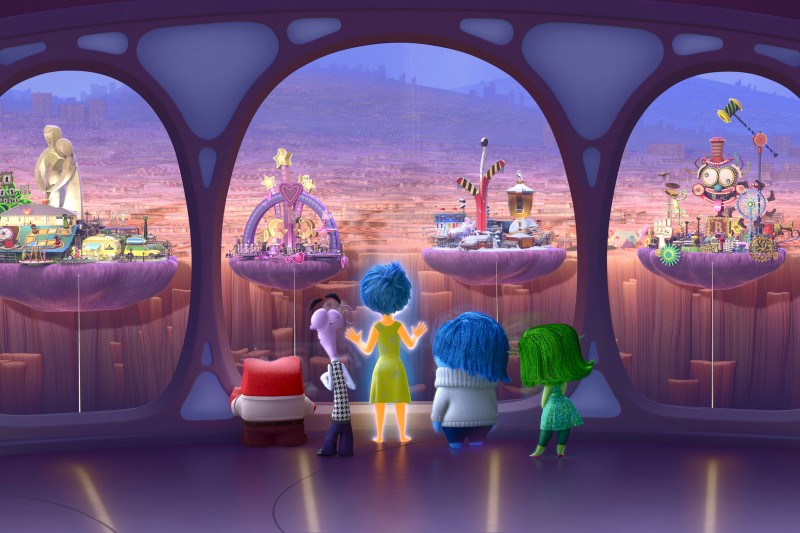 Writer/director Pete Docter previously brought audiences to tears with 2009’s emotionally charged hit Up. This time around, the emotional impact is much subtler but nonetheless impactful. This is a story that every parent of a preteen should introduce to their child. Docter’s intellectually inspired tale takes all of us on a textured trip down memory lane. For the adults, it reminds us of so many wonderful (and not-so-wonderful) experiences from our past. For the kids, it teaches a more powerful, more prescient message. Memories are not just black and white or good and bad. The very best memories are much more complex in makeup and experience.

The voice acting is stellar across the board, although Black as the outburst-happy Anger manages to get the most memorable lines. The visuals are superb as usual with every Pixar film. At this point, however, they don’t quite wow us the way that they used to. There’s little reason to bother seeing this one in 3D. The meatier material may prove a bit much for viewers under the age of eight, although there’s still plenty for them to enjoy. Just be forewarned that it includes a few very hard, very emotional moments. The middle of the film contains its deepest, darkest material and runs a bit long. It’s also very likely to lose the interest of many of the youngest viewers. For the rest of us, its poignant message comes packaged in a brilliantly lovable tale that is destined for long-term storage.

Be sure to get there on time to catch the traditional preshow Pixar short. This one is called Lava, and it’s simply beautiful. There also are some nice final sequences over the closing credits.