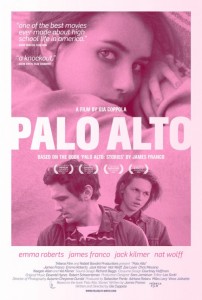 High school classmates wrestle with the apprehension, risk and wonder of burgeoning independence in Palo Alto.

Very few teens emerge from their high school years without the experience leaving an indelible imprint (good and bad) that they’ll carry with them the rest of their lives. For many, the journey can feel like traversing a minefield, blind, with unknown dangers looming perilously beneath every potential step. The simplest of wrong turns can make or break what little regard your peers may have for you. Living daily with such tension creates a roller coaster of emotions, turning unrestrained joy into crushing torment in the blink of an eye. Self-discovery knows nothing about the true order of things.

April (Emma Roberts) is a bright, introverted virgin who is torn between a typical but taboo crush on her outgoing, alluringly inviting soccer coach (James Franco) and the awkward advances of one of her male friends. That friend, Teddy (Jack Kilmer), is most at home in the shadows. Light brings attention, and attention is just too demanding and troublesome. Teddy’s best friend Fred (Nat Wolff) hides his insecurities behind a wall of projected confidence and untamed, often wanton, energy. He’s the type of bad boy who doesn’t quite have the swagger to pull it off. Instead, his unpredictable nature just keeps everyone on edge around him. Their friends all struggle to find their way, each on their own unique path. 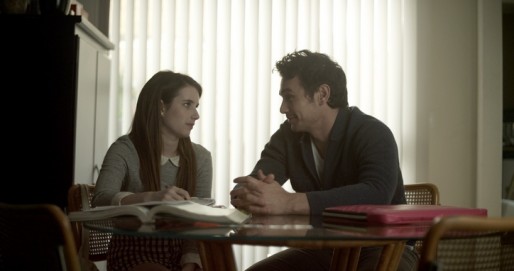 The plot originates from a series of short stories penned by Franco. First-time director Gia Coppola expands them into a surprisingly polished coming-of-age tale that drips with unadulterated authenticity throughout. Her presentation delivers every viewer back to the heart of their most angst-ridden years. The sets, shots and material are sure to stir up dormant memories forgotten or perhaps buried long ago. Coppola, just 27, is able to conjure up, at will, the sheer pressure of unwavering expectations that surrounded us all. Every major character is alive with complexity. They live imperfect lives surrounded by imperfect people and depend on a litany of fantasies and daydreams in a constant effort to stay one step ahead of the depression that haunts them all.

Coppola also preys on our own fears by carefully intertwining perceived, but ultimately tame, threats with natural choices that are actually far more perilous. To say that she touches a raw nerve is an understatement, especially for those of us with a few more years under our belts.

No film of recent memory so totally and effectively envelops its audience. I wanted to look away so many times, but I feared missing even the most minute detail. This is a film to be experienced.