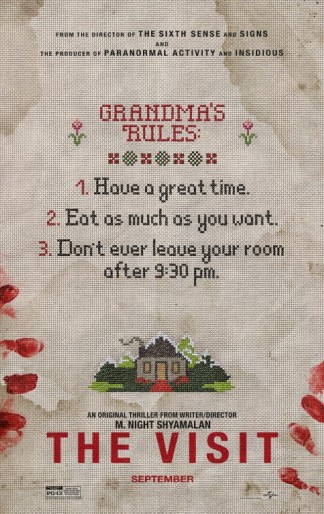 A highly debated and mostly unaccepted theory to housebreak a dog is to rub its nose in the mess that it left behind to try to teach it not to do it there again. After seeing The Visit, the latest release from Philly’s own M. Night Shyamalan, I feel like the filmmaker is rubbing our faces in it and we still haven’t learned our lesson. Instead, I offer this review as a way to reverse this action. Hey, Shyamalan, stop delivering such crap to filmgoers and mocking them in the process. The Visit is an epically bad “disasterpiece” that should cause you to avoid this trip to grandma’s house and go visit another theater instead.

For many years, I was a champion of Shyamalan’s films. I still give credit where credit is due despite the out-of-control downward spiral. Wide Awake is a wonderful, spiritual, emotional movie about a boy’s search for meaning and God after his grandfather dies. There would have never been The Sixth Sense without it. Even without the famous twist, The Sixth Sense is a perfect movie in so many ways. I still believed that Shyamalan had another great film in him, and I liked both Unbreakable and Signs less as stand-alone movies and more as the first parts to two-part miniseries given how they abruptly resolved in the last few minutes. The Village annoyed and insulted me, and Lady in the Water sank to lower levels of ridiculousness and bad decisions from which Shyamalan has not yet recovered. I used to think that After Earth was the nadir of his work until The Visit. The trailer convinced me that this would not be something to remember for its good qualities. The sad thing is that I honestly think that Shyamalan is excellent in the process of filmmaking. He falters when it comes to story. A writing partner would vastly improve his work, and I’ve often said that an hour or two with some beers and an honest discussion of his films could set him on the right path. That offer still stands.

The Visit begins with sister and brother Becca (Olivia DeJonge) and Tyler (Ed Oxenbould of Paper Planes and Alexander and the Terrible, Horrible, No Good, Very Bad Day) being packed up and shipped off to the grandparents whom they have never met while their mother (Kathryn Hahn) goes off on a cruise. Becca is an aspiring filmmaker, so the entirety of this movie falls into the found footage genre as the clips recorded by the siblings on their trip. That brand of storytelling already distances the characters from the audience. When Becca and Tyler meet the grandparents, they notice that they’re a bit strange, and they’re told to stay in their room after 9:30. Are Nana (Deanna Dunagan) and Pop Pop (Peter McRobbie) mogwais who turn into gremlins a little early? Nope. It’s worse. Nana exhibits such winning behaviors as running around the house naked and clawing at the walls. As the days and nights pass, Nana and Pop Pop prove to be less stable and more unpredictable. Becca and Tyler are in touch with Mom via Skype, and their concerns eventually lead them to want to leave ASAP.

I’m not sure that the bad acting on the screen is really bad acting or good actors doing what they’re told. Given that some of what would fall into bad acting comes from the dialogue or character traits, I have to blame both the writing and directing sides of Shyamalan. If you look at the work of Dunagan and McRobbie, they have extensive lists of credits that they would never accumulate if they had no skills. In The Visit, their timing is just off, and you’re made uncomfortable by their presence in almost every scene. It’s like they’re in a competition to see how silly they can act. Maybe that was intentional. DeJonge and Oxenbould fare much worse. They spout dialogue that simply doesn’t work. No kids talk like they do with casual uses of phrases like “mise-en-scène.” To top it off, Tyler thinks that he’s a great rapper with a stupid nickname, delivers cringe-worthy rhymes and peppers his sentences with words like “swerve.” Oh, yeah, he has a lisp, too. A rapper with a lisp? Ugh. Hahn is the only one who emerges unscathed from The Visit. Her “interview” scenes are the only ones that remotely involve natural acting. 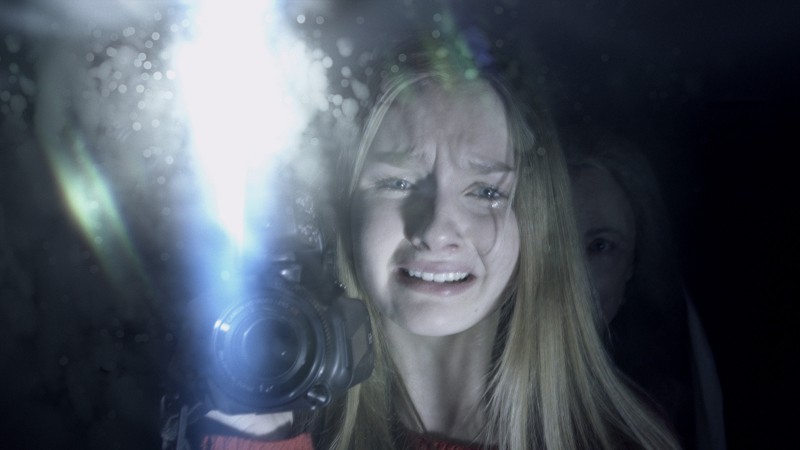 The biggest problem with The Visit is that it’s hard to figure out whether it’s supposed to be a horror or comedy or both. The trailer and advertising (Web site, poster, etc.) would have you believe that this is a thriller. You wouldn’t have guessed it from the screening that I attended. I laughed myself to tears at the unintentional comedy in some scenes, and the audience roared with laughter throughout. You could argue that a film that makes people laugh is a comedy, but I would counter that this film has the unique distinction of being so absolutely terrible that you have to laugh at it and make fun of it or leave the theater. The producers of the Scary Movie franchise don’t even need to spoof this nonsense; they can just lift the scenes intact.

Shyamalan is so insecure in his horror that he uses cheap scares like characters jumping into frame. Shyamalan can only be called puerile when he teases a scene from “Hansel and Gretel” with an oven. This is amateur filmmaking at best, and if I didn’t know that Shyamalan was the filmmaker, I would assume that it was a film student. Also, the premise makes no sense from the get-go. A woman who left home as a teen with intense drama sends her beloved children to go stay with her estranged parents for a week when she hasn’t spoken to them in years and the kids don’t know them at all?! I don’t think so.

Shyamalan has always been good to the Philadelphia region with his movies, and The Visit highlights some locations in small towns outside Philly and nearby Amtrak train stops. Set in the fictional Masonville, PA, the sites are actually in Montgomery County and Chester County, including the beautiful main house and grounds that serve as the grandparents’ homestead. Old, creaky houses with big basements are perfect for horror movies. Hell, there’s even a woodshed, which has been the setting for many classic moments in horror flicks. (If I told you what Shyamalan reveals in the woodshed, you wouldn’t believe me. It elicited one of my laughing fits.) There used to be a tour of the locations used in The Sixth Sense, and if you add other sites from the Shyamalan oeuvre, it would be a nice jaunt throughout the region. Philly loves its hometown people, but Shyamalan has really pushed things to the limit over the past few years.

I used to think that there could be no worse Shyamalan movie than After Earth (nicknamed “Afterbirth” by me and many others), and he proved me wrong by embracing the stale found footage genre. One of the biggest artifices with the genre is that nobody walks around with a camera at arm’s length when the proverbial shit hits the fan. If Shyamalan wakes up from his nightmare and begins making great films again, I’ll be the first to welcome him back. Unfortunately, that might be a long time coming with producers who give him free reign instead of doling out writing support or constructive criticism. The Visit set my bar for bad movies to a new low, and it’s a shoo-in to take all of the awards at the Razzies. You don’t have to follow grandma’s rules or listen to me, but consider yourself warned.