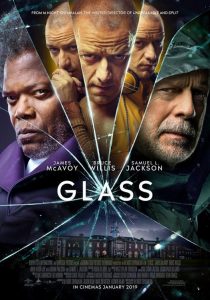 A determined doctor tries to convince three deadly patients that they aren’t superheroes in Glass.

Dr. Ellie Staple (Sarah Paulson) is on a mission. Three of the most dangerous patients secured within her mental hospital believe that they have supernatural abilities. She’s out to convince each of them that the only thing unnatural that they share is mental illness. The longest-held patient, Elijah Price (Samuel L. Jackson), is a nearly-comatose wreck of a man who suffers from a debilitating bone disease. His newest neighbors include David Dunn (Bruce Willis), who thinks that he can sense evil simply by touching people, and Kevin Wendell Crumb (James McAvoy), whose severe case of dissociative identity disorder manifests itself through several unique, often disturbing identities.

The doctor’s attempts to dissuade the trio of their beliefs seems to have little impact as the three secretly plot their own escapes.

This is the third and hopefully final chapter in the series that started with 2000’s Unbreakable and then continued with 2017’s Split. I’m anything but a fan of either of those films. In fact, my nickname for the first is “Unwatchable.”  I wasn’t at all sure that I had it in me to revisit any of these characters, but surprises happen. Plus, the word on the street is that director M. Night Shyamalan had to mortgage his house to get this film done. I’d only have to invest two hours in it, but two hours can be an eternity with some films.

The first hour swept by, immersing me in its dark, atmospheric world. I was transfixed by Shyamalan’s approach and deft styling. I found Glass meatier, deeper and more compelling than either of its progenitors. This curious, unexpected story had me in its grasp… before dropping me like a bad habit. The plot took turns so sharp and misguided that a professional race car driver couldn’t have kept this wreck on the road. The second hour devolved into a battle of me trying to keep the faith and Shyamalan doing everything possible to destroy it. It turns out that the film’s biggest enemy is entirely uncredited — logic.

Oh, there are simple missteps like Willis’s character getting drenched and then showing only a drop or two of water on his face, but there are also several monumental mistakes that just can’t be processed rationally. It’s like trying to ignore a magician who think’s that he’s disappeared by dropping a sheet over his head. It’s just absurd. Dr. Staple tries telling Dunn that he’s not a superhero, but his room is filled with dozens of high-powered water cannons. I haven’t ever visited a mental hospital, so maybe every third room is equipped like this. Let’s just say that I have my doubts. McAvoy’s antics are fun to watch, but as in Split, they grow stale. There’s also the return of  Anya Taylor-Joy‘s character from that film, but the less said about her ludicrous subplot, the better. Scene after scene after scene, we watch as characters do one heinous thing after another, in broad daylight, in full view of many; and no one seems to notice. Philadelphia is on DEFCON 1, but the police are nowhere to be seen.

Looking back over Shymalan’s career, I’m struck by the realization that he seems incapable of seeing his work from outside his own mind and perspective. It’s not the easiest thing to do, but the best filmmakers have that ability. The last thought that I had when leaving the theater wasn’t about the plot, but whether or not this would make enough money to keep a roof over its creator’s head. 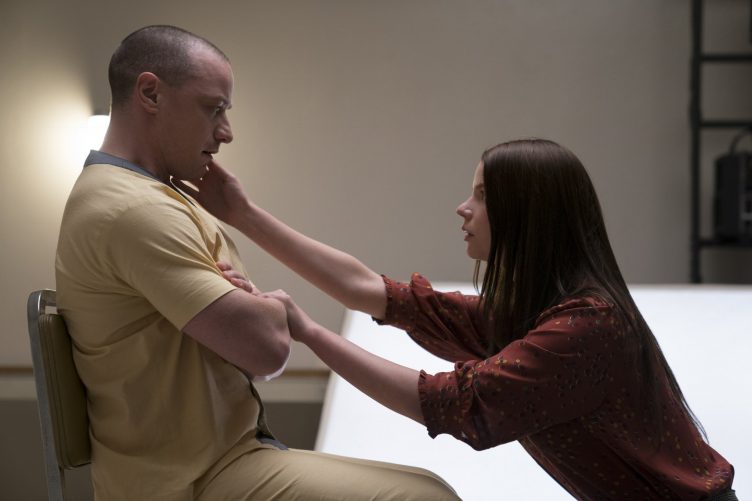