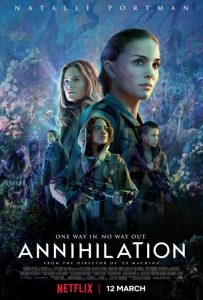 A grieving biology professor embarks on a treacherous mission to save the planet from Annihilation.

Lena (Natalie Portman) spends her days searching for meaning after losing her husband Kane (Oscar Isaac). An Army combat soldier, Kane went missing a year earlier in a mysterious covert mission for which Lena can get no answers. Events take a surprising turn when, out of nowhere, Kane turns up unannounced at their home with little memory of where he’s been or how he got there. His inexplicable reappearance brings the authorities scrambling. The two are unceremoniously whisked off to a clandestine facility and kept apart.

Lena spends the next few days being interviewed by the facility’s impassive psychologist, Dr. Ventress (Jennifer Jason Leigh). She learns that a strange force, nicknamed The Shimmer, has materialized at a local lighthouse and is spreading in a slowly expanding circle. She also discovers that her husband was assigned to one of several scouting parties sent to investigate The Shimmer from within. No one, except him, has ever returned. The situation is clearly dire as everyone realizes that it’s only a matter of time before The Shimmer expands to cover the entire globe. Desperate to find out what happened to her husband, Lena joins the next group to venture forth into The Shimmer in search of essential answers. What this group of five women encounter will test everything that they know about the world and their places in it.

This surreal sci-fi flick was written and directed by Alex Garland based on a trilogy of novels from Jeff VanderMeer. Garland is the man behind  Ex Machina, one of my top five films of 2015. It’s smart, well thought out and eminently believable. None of those traits can be applied to this film. The tone is set by an inescapably creepy score that guarantees that you’re never quite settled. The look is most often driven by dark shadows, shades of gray and countless disturbing set pieces. The ingredients for a first-rate experience are all here until the story unfolds. It’s then that we realize that the biggest battle of all is not what Garland wanted us to focus on, but the one we have to wage with our own common sense. That little voice inside just keeps screaming about the implausibility of it all.

I also couldn’t escape a sense of déjà vu. I then remembered having this same frustrating experience with another sci-fi film from 2007 called Sunshine. It also had all of the right pieces, but then fell apart spectacularly in its final act. I should have guessed that it was also written by Garland. A listing of Annihilation‘s lapses in logic would drag on for pages, so I’ll just mention one. When the women, all academic professionals in their respective fields, cross over into The Shimmer, the camera shifts to a shot of them emerging from their tents. They quickly realize that they have no recollection of setting up camp, and their rations prove that they’ve already been there for several days. It’s simply not plausible that none of these highly educated, scientific-minded women thought to keep a journal. Life may very well depend on what they find, but they don’t think to record any of it? Trust me; that’s the tip of the iceberg.

At its core, the story is wonderfully engaging. The visuals are the stuff of acid trips. Everything we see triggers a fascination that draws us in more until we hear that determined voice again. Like Sunshine before it, the film’s final act collapses with the same ferocity and effectiveness of a once-glorious building reduced to dust in a flash of exploding demolition charges. 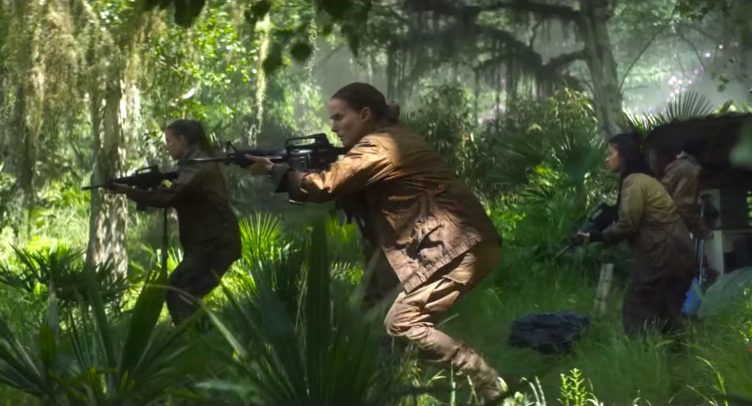