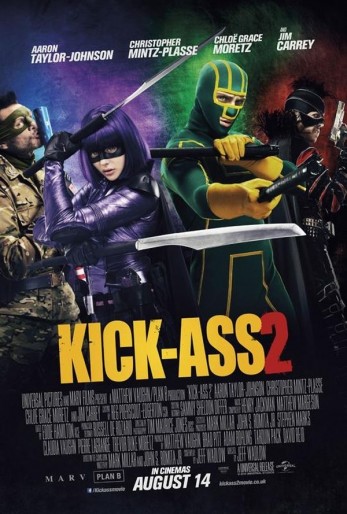 I guess it’s a reflection on our society today that the original Kick-Ass had characters obscuring the large logo on the poster to not offend anyone, whereas there’s no attempt to cover up the movie name now. Also, there were numerous complaints about Chloë Grace Moretz’s age because of the language and violence of her character; I guess people feel like she’s old enough now. Regardless of the reason for the changes in the world, Kick-Ass 2 gleefully embraces its language and violence tinged with humor. In a summer of superhero movies that wowed audiences or put them in a slumber with not much in between, Kick-Ass 2 firmly fits in the former category. This is a sequel that throws in more of the same elements that made the original such a hit and ramps it up to a new level with additional characters and even more outrageous fight scenes.

Writer/director Jeff Wadlow (director of Never Back Down and cowriter/director of Cry_Wolf) takes over the directing reins with this sequel but still nods to the comic book series by Mark Millar and John S. Romita Jr. Although the title would have you believe that Dave Lizewski aka Kick-Ass (Aaron Taylor-Johnson) is the focus of the movie, Mindy Macready aka Hit-Girl (Moretz) has the more challenging, interesting story arc. Both characters try to find their place in a world that now accepts superheroes after the events of the first film, but Mindy has more personal issues going on that lead to conflicts for both Mindy and Hit-Girl. Mindy tries to fit in at school and runs afoul of popular girl Brooke (Claudia Lee). Mindy follows the rules established by substitute father Detective Marcus Williams (Morris Chestnut), but she has a hard time keeping Hit-Girl under wraps. Dave and Mindy meet to train as Kick-Ass and Hit-Girl. It’s clear that Hit-Girl has all of the fighting skills.

The plot of this movie really hinges on the everyday people who want to become superheroes or villains and how they gravitate to teams. Kick-Ass and Hit-Girl meet up with the members of Justice Forever led by Colonel Stars and Stripes (Jim Carrey). The team also includes cocky Doctor Gravity (the always funny Donald Faison), nerdy Battle Guy (Clark Duke) and the sexy Night Bitch (Lindy Booth – Dodger in Cry_Wolf). Chris D’Amico (Christopher Mintz-Plasse) also undergoes an identity crisis after a family member’s death. Does he continue as the kind-of-wimpy Red Mist, or does he become the ultimate supervillain known simply as The Motherfucker? His team of bad guys includes Mother Russia (Olga Kurkulina), Black Death (Daniel Kaluuya) and Genghis Carnage (Tom Wu). The forces of good and bad strike back against one another over the course of the film and eventually meet for an expected mass fight scene. Hit-Girl versus Mother Russia is an amazing match-up that reminds me a lot of Rocky Balboa (Sylvester Stallone) versus Ivan Drago (Dolph Lundgren) in Rocky IV; Mother Russia is an imposing Russian fighter who can break Hit-Girl’s bones with little effort. 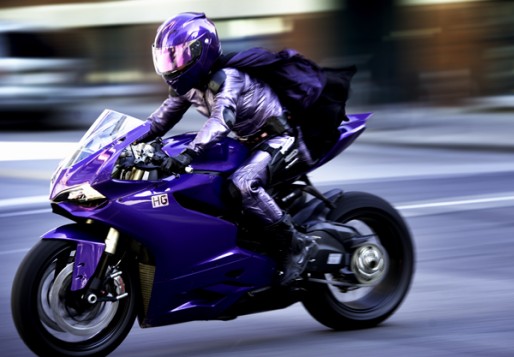 Moretz displays the perfect personality as Mindy and Hit-Girl. She’s sassy, agile, foulmouthed and occasionally mean. It’s such a joy to watch her in this film, and when she rides her purple Ducati motorcycle, Joan Jett plays on the soundtrack. Moretz still gets to curse a lot in Kick-Ass 2, but this time, Detective Williams thinks that he can influence her positively with a curse jar. Her response? “We’re gonna need a bigger jar.” Mindy’s relationship with Brooke and the clique of Clueless-like high school girls calls to mind Moretz’s other major role this year as the titular Carrie. You just know that there’s going to be trouble when one of these airheads asks, “Who’s Stan Lee?” Johnson also impresses in Kick-Ass 2, and his scenes as the bespectacled Dave suggest his more impressive role as John (Lennon) in Nowhere Boy. Carrey looks strange with facial prosthetics, a buzz cut and a patriotic costume. Colonel Stars and Stripes doesn’t like people to curse no matter how violent he is; similarly, Carrey disingenuously decried the violence in Kick-Ass 2 after one of the more recent shootings. He had to have read the script before filming, so to publicly lash out against your own movie is silly. Other familiar faces include John Leguizamo, Yancy Butler, Benedict Wong and Iain Glen. These actors are sadly tied to smaller roles. The members of Justice Forever and The Motherfucker’s posse are the real stars here. There aren’t quite enough characters to demand a scorecard.

Although there are only a few scenes with a lot of blood, Kick-Ass 2 is intensely violent. This is more like Quentin Tarantino violent than slasher film violent, which implies a certain level of humor amid the punches, cuts and bruises. Mintz-Plasse injects a lot of this levity to the fight scenes, especially when his character wears modified bondage clothes as a costume. Kick-Ass 2 won me over because it built upon its foundation from the first film and offered more, more, more. Only lazy sequels churn out the familiar rather than something new. Kick-Ass 2 thoroughly entertained me and kicked it up a notch.