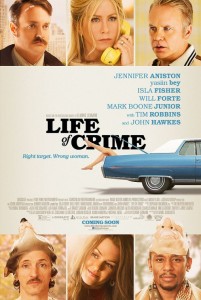 The wife of a loathsome real-estate developer is kidnapped by a couple of amateur crooks in Life of Crime.

In the late ’70s, Detroit hadn’t yet fallen into the complete disarray it finds itself in today, although it was well on its way. A local housewife at the time, Mickey Dawson (Jennifer Aniston), spends her days in the shadow of her domineering husband Frank (Tim Robbins). He’s the quintessential man of the ’70s. Frank is hard-drinking, drives a Cadillac, spends his spare time at the golf course or the tennis club and has spent the intervening years perfecting the art of wifely neglect that likely started before their first anniversary came to pass. As far as Frank’s concerned, Mickey’s got nothing to complain about. She also drives a Cadillac, lives in a nice home, wears nice clothing and gets to brag about her fairly successful husband. What’s not to like?

Meanwhile, two small-time crooks, Ordell (Mos Def, credited as yasiin bey)  and Louis (John Hawkes), find out that Frank’s been screwing the IRS out of large sums of money and keeping it in a personal account that his wife knows nothing about. They decide to kidnap Mickey and demand a huge ransom from Frank. What they don’t seem to grasp is that Frank loves his money almost as much as himself and both a lot more than he loves Mickey. Their vision of a quick, hassle-free bit of villainy turns out to be far more complicated than they ever considered. 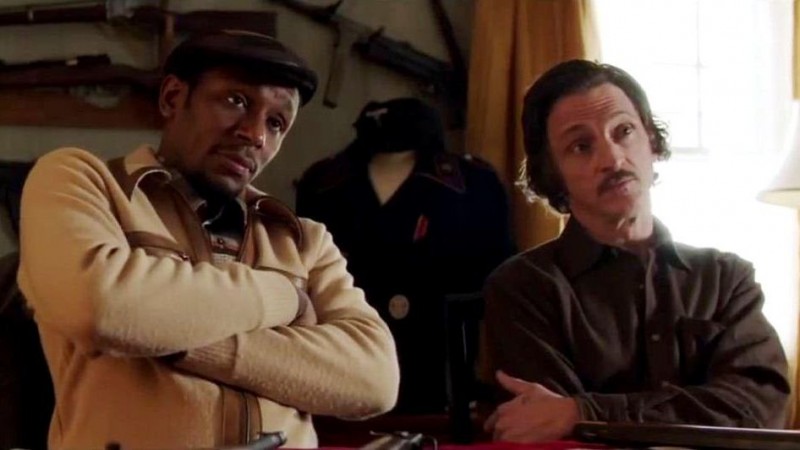 This dark comedy caper features a wonderfully diverse and talented cast in a film that utterly wastes every ounce of their abilities. Time and again, I found myself comparing this film — quite negatively — to the hilarious antics in 1986’s Ruthless People. The two scripts are entirely unrelated, but there’s enough commonality between them to realize just how badly this one mangles the potential.

It’s not that the performances are bad. For the most part, they aren’t. The actors just aren’t given anything to work with. This is what happens when you take 30 minutes of material and try to stretch it into a 94-minute running time. The result feels painfully dull and interminably slow. We know where it’s going long before the characters do. When the plot’s biggest challenge surfaces, the answer is obvious to everyone but the criminals — not in any way that the writers intended.

Nothing about this laughably humorless “comedy” is surprising or believable. Even the historical surroundings fail the sniff test. This is a film designed by simpletons for simpletons. The only real crime is that someone was scammed into paying for this in the first place.