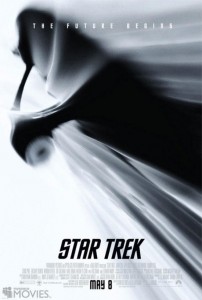 I wouldn’t call myself a Trekkie or a Trekker. However, I would call myself a fan of the Star Trek series. I know some terms that complete non-fans wouldn’t likely know (for example, that TOS stands for “The Original Series”) but I wouldn’t do very well on Star Trek trivia. Before I get to the movie I think it would help to get some background first:

I liked the aforementioned original series and watch it even today as it’s now being updated in HD with most of the special effects getting a major face lift. It’s never looked better. As a kid I watched the animated series. I absolutely loved Star Trek: The Next Generation. I think it’s the best Star Trek has ever been. I never could get into Star Trek: Deep Space Nine. I found it wanting and, frankly, I’ve never liked the actor Rene Auberjonois to the point of not watching the series as a result. It didn’t help that I felt his character was one that was over the top (he played a shape-shifter able to essentially be anything).

Then came the much-maligned Star Trek: Voyager which I enjoyed immensely. It gave us, in my view, the best character the series has ever seen in the Doctor (a holographic projection that has interesting human attributes and desires). TNG’s Commander Data is a close second, FYI. It had its flaws but the stories were often up to par with TNG’s. Of course then we got the laughable Enterprise but I watched this as well as I’d become desperate for more Trek by the time it appeared.

As far as the movies went nothing topped the first film, Star Trek: The Motion Picture. It’s not that it was a pantheon of filmmaking—it wasn’t. It’s just that it came along at the right time after a long lay-off from TOS and gave us a chance to re-visit old friends with a story that was compelling enough. It stuck in my mind as a positive from then on. I only liked two of the other films in the entire series. The first was Star Trek: The Wrath of Khan which was the follow-up the the first film. It was just okay but Ricardo Montalban‘s Khan was noteworthy. The second was Star Trek IV: The Journey Home. It was old at that point and everyone involved knew it. The result was one of the funniest (by design) Trek’s we’ve ever seen along with a pretty decent story. The rest of the films you can keep. They have some moments but none of them made a decent enough dent for me to care.

So that brings us to the current Star Trek movie. I saw the previews and knew I’d see this on opening weekend (I’m just getting to this now due to my busy schedule—sorry). However, as time went on I started getting concerned about the storyline. I’m enough of a fan that I expect tradition to be somewhat kept in tow. This movie takes much of what happened prior and tosses it in the garbage. Oddly, several scenes and comments seem like they’re there to tie us into those traditions but when you crap on them in one instance it’s hard to appreciate it when you give tribute to it in another.

The look is great and it includes some solid special effects. The characters are also, for the most part, well done. Captain Kirk is played well by Chris Pine and Zachary Quinto does a marvelous job as Spock. The biggest annoyance here is the portrayal of helmsman Pavel Chekov. The actor playing him either has the worst Russian accent in history or wanted to distract us at with every spoken word. I couldn’t even pay attention to the guy for what he was saying.

The story also failed almost entirely for me. It just didn’t involve anything I’d define as memorable. It’s been a week and I’ve forgotten most of it already. There was a lengthy discussion after the movie talking about several confused time lines that just were more confusing than they needed to be. Then there were the tradition-dumps that stuck out heavily. I’d mention them but they’d ruin it for those who haven’t seen the film.

In the end it’s a movie that is doing quite well and does a decent job of re-starting the series. I just hope it can find a more compelling, less confusing script the next time round.