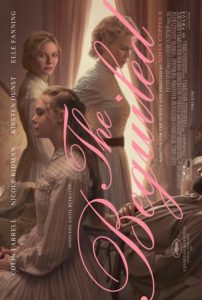 Don’t ever mess with a Southern woman! If that wasn’t already common knowledge, it certainly is after a viewing of The Beguiled. To beguile someone is to engage the interest of by duplicity or cunning, so in this case, the titular subjects are both characters in the film as well as the audience members themselves. Cinema sucks us in even though we know that none of what we see is real. The best movies cause us to forget where we are and go along for the ride. The Beguiled gets under your skin in an uncomfortable and memorable slow burn on the verge of exploding at any time.

Writer/director Sofia Coppola delivers this delicious film to add to her collection of quirky, interesting projects that include The Virgin Suicides, Lost in Translation, Somewhere and Marie Antoinette. Coppola crafts an adaptation of the Thomas Cullinen novel and a remake of the 1971 version starring Clint Eastwood. Coppola’s spin on the story anchors it heavily on Nicole Kidman and stars of her previous films Kirsten Dunst and Elle Fanning. The story takes place on the Virginia grounds of the Farnsworth Seminary, an academy for young ladies, during the Civil War. One of the girls discovers Corporal John McBurney (Colin Farrell) injured and hiding behind a tree after a nearby battle. Despite his position as a Union soldier, headmistress Miss Martha (Kidman) takes him in to nurse him back to health and eventually release him to return to war or captivity. The ladies could not predict the effect that he has on these impressionable females as he pulls their strings and pushes their buttons.

With such a small cast, every actor has to pull his or her own weight and then some. The closed quarters of a Southern school in a plantation-style house magnify the choices of every actor. None of it feels forced or unnatural. The story pits one man against seven ladies, and each of the actresses has an important role despite the obvious focus on Kidman, Dunst and Fanning. Kidman radiates beauty and authority, yet Miss Martha probably only gets noticed by her pupils for the latter. Dunst ably takes on her role as a plain, romantic teacher who’s looking for a way out of this dead end. Fanning alternates between bored and even more bored until Farrell’s McBurney shows up, then the hormones rage all of the time. Oona Laurence, Angourie Rice, Addison Riecke and Emma Howard add little touches to the story as they exhibit their own unique levels of fascination with their new roommate. Farrell nicely slides between injured soldier and debonair handyman and clearly enjoys this meaty role. Heck, he even gets to use his natural Irish accent because his McBurney was hired as a mercenary to help the Union.

Coppola enhances the actors’ work with lots of little details and scenes that raise the tension and fill out the film. You almost subconsciously hear explosions from the battles in the distance to accompany the real ones that Coppola adds to the soundtrack. Of course, the entire house is a powder keg of a different sort ready to explode. Coppola expertly focuses on the slightest looks by the characters that speak volumes about what’s going on inside their heads. This technique unfortunately requires jarring cuts back and forth to get it right. When that’s not enough to convey the emotion, heaving breasts and longing sighs emphasize feelings as much as any romantic fiction paperback with a shirtless Farrell on the cover instead of Fabio. Developing potential relationships with some of the ladies, Farrell’s McBurney switches from hoeing the fields to fielding the hos.

(Although we include the official trailers with our reviews for those people who just love trailers, I recommend not watching the trailer for this movie until after attending. It includes at least two revelatory scenes that should be part of the discovery of watching The Beguiled. Clearly, the marketing idiots who edited together the trailer used a CliffsNotes approach to summarizing the story rather than a more general suggestion of activity that I could have put together myself.)

Coppola delicately balances the good and the bad in The Beguiled. There’s one scene that’s very difficult to watch, and elsewhere, Farrell fans will enjoy a few minutes that are steamier than a New Orleans summer day in the swamps. Given the basics of the plot, I hoped for something more along the lines of Boxing Helena instead of the more appropriate subtleties on display. The Beguiled further establishes Sofia as the heir apparent of the Coppola filmmaking name. 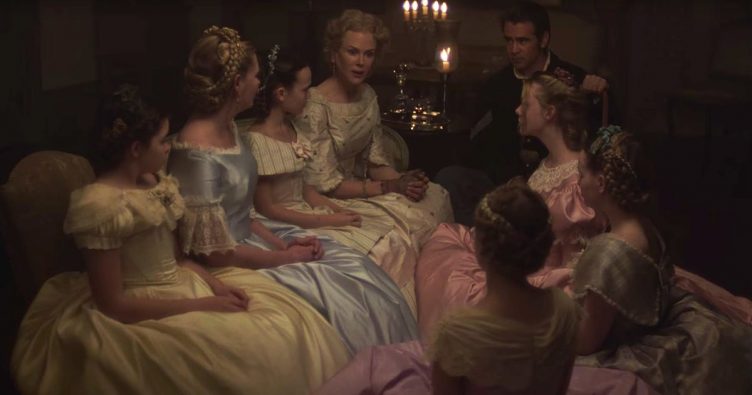