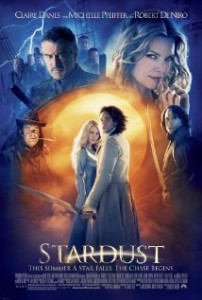 Next up is Stardust which I think the Philadelphia Inquirer nailed in its review. They basically said it was a good movie that is unlikely to find an audience. It has too much romance for the kids and too much fantasy for the adults. Thankfully, I walk the line between those two perfectly so I enjoyed it quite a bit. It’s a wonderful classic fairytale love story that requires you to just put the believability meter in your back pocket and forget about it. I think its biggest failure was in casting. I really like Claire Danes but she just didn’t seem right in this role. She came off as trying to be a light version of Cate Blanchett in Lord of the Rings. It didn’t help that Ian McKellen did the narration of the story. He did a great job but it kept me thinking about how much better the LoTR movies were. The leading male character, played by Charlie Cox, was also miscast. He was a complete throw-away.  I can hardly recall what he even looked like a week after seeing the movie.

Meanwhile, much to my complete surprise, Robert De Niro stole the show. When I first saw the character it reminded me of Dustin Hoffman playing Captain Hook and the disaster that was. This was completely the opposite. His character was wonderfully portrayed and memorable.

The look and the sound are extremely well done in the film. We get some nice framing and some impressive, interesting special effects that add to the fun.

However, it tries to be more than it is and I kept thinking that the producers came within a stone’s throw of getting it home, but ultimately missed. I definitely recommend it but it won’t go down as a classic. It sort of wanted to be The Princess Bride and sort of wanted to be Lord of the Rings and sort of didn’t make it anywhere in the process. Someone goofed. For example, there’s this wonderful plot line involving a set of brothers who are all interested in becoming the next King. One by one they fail and end up, in death, walking around forever trapped as a ghost until a new King is found. These ghosts could have been absolutely hilarious. Instead they’re only moderately interesting. I’m sure the writers and producers thought they were funny but they just weren’t. As I said though, I still would think most people will enjoy the movie.