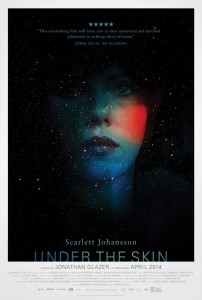 An alien from unknown origins uses an attractive human form to lure prey to their death in Under the Skin.

There seems little doubt, at least in Hollywood, that if aliens ever did inhabit our planet, their ulterior motives would be anything but pleasant for the human race. Scarlett Johansson stars as an unnamed alien who travels around Scotland looking for men to enchant with her sex appeal. Once under her spell, she convinces them to come back to her place… where they’re never heard from again.

The alien isn’t alone. She works in tandem with a small contingent of overseers who act as a sort of clean-up crew should anything go wrong, either for the alien or with humans who don’t quite follow the expected plan. They travel about the countryside on motorcycles like worker bees just doing whatever dirty work crops up. They’re all business, going about their tasks in a very robotic, emotionless manner.

Director Jonathan Glazer creates a surreal tale from the the outset. Shooting in Scotland provides ample atmosphere with its naturally damp and dreary weather. The heavy Scottish accents only add to the effect. They’re so prominent that much of the sparse, mainly unnecessary, dialogue is nearly indecipherable. Glazer keeps the tension high by refusing to let the audience discern what the aliens are truly up to. This is effectively compounded by a number of scenes that are deeply disturbing in a way that has to be witnessed firsthand. 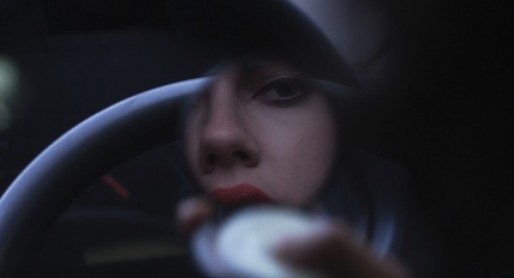 Once the reality begins to set in, the hypnotic hold breaks, and we’re left with a repetitive film with little meaning and few, if any, answers. Artistic choices, including what I can only assume is heavy symbolism, transform a thrilling plot into a laughable story. No one reacts normally to the alien. Maybe they’re under some sort of trance, but if so, the script never moves to validate that possibility. The feeling is like watching a fisherman cast and catch an easy fish… over and over again. Grazer is no stranger to bizarre visuals. He directed one of my favorite films, Sexy Beast, which includes scenes so outrageous and confusing that I have to always use an asterisk when recommending it to people.

It also seems to be a foregone conclusion that many fans will show up just to admire the over-the-top gratuitous nudity, which features Johansson in surprising detail. Visions of 1995’s Species immediately come to mind, and that’s not a compliment.  It’s a bit disappointing that this vehicle is the one that she felt warranted such exposure.

Don’t expect the ending to save the day, either. Like the rest of the film, it provides no answers, leaving me to conclude that the audience is its ultimate unwitting prey.