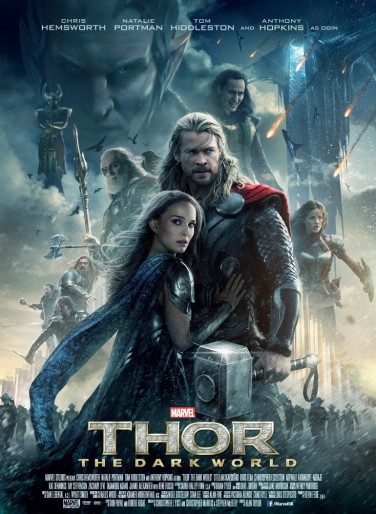 We’re now in the midst of a glut of movies based on Marvel superheroes and other characters, and there’s no sign of it letting up. For comic book fanboys, this is great; for the rest of moviegoers, it may not be so exciting. I’ll cross my fingers that things don’t decline to the point that there’s a movie based on Damage Control, the team hired to clean up after battles that destroy areas of cities. Of course, even that movie might be exciting in the right hands. Thor: The Dark World is the latest Marvel movie to tide us over until the eventual sequel to The Avengers, perhaps the greatest superhero team movie ever. After Iron Man 3 — one of my favorites of the year — started off the summer on a high note, any other movie would be a disappointment. There are some wonderful moments as well as ridiculous elements, so Thor: The Dark World fails to bring the hammer down on the more worthy competitors in theaters these days leading up to the holidays.

I was rather noncommittal about Thor as delivered by director Kenneth Branagh. It just seemed like yet another origin story to be dumped into theaters before the character of Thor (Chris Hemsworth) had more interesting things to do. That proved to be true as Thor was essential to The Avengers. Once again, this film really serves as a bridge to another big movie — in this case the three movies Captain America: The Winter Solider, Guardians of the Galaxy and The Avengers: Age of Ultron. You would think that Thor would deserve his own adventure at this point, and Thor: The Dark World is an attempt to do just that. Is it successful? I’m skeptical, but I liked the film a lot more than Thor. The creative team brings together a lot of disparate experience, and that perhaps explains the unusual mixture of elements. Director Alan Taylor has worked largely in TV, especially Game of Thrones. Cowriter Christopher Yost has mostly written for superhero cartoon series. Cowriting team Christopher Markus & Stephen McFeely wrote this year’s Pain & Gain as well as cowrote the Captain America and The Chronicles of Narnia movies.

Thor: The Dark World has a better plot than its predecessor and reassembles all of the main cast members from the first film with some notable additions. Thor is in the process of cleaning up the destruction left behind by his troublesome brother Loki (Tom Hiddleston) throughout the Nine Realms. He still pines for human scientist Jane Foster (Natalie Portman) and has the gatekeeper to Asgard (Thor’s realm) named Heimdall (Idris Elba in a bigger role) keep an eye on Jane. Odin (Anthony Hopkins) sentences Loki to prison for life rather than kill him outright because his wife Frigga (Rene Russo) pleads on his behalf. In the backstory, the race of Dark Elves led by Malekith (Christopher Eccleston) went up against the Asgardians in the time of Odin’s father and in an attempt to snag this swirling power called the Aether and bring about an age of darkness. Malekith escaped, and Odin’s father hid the Aether. When Jane accidentally gets infused with the Aether, Malekith is awakened and attacks Asgard. Thor has to save Jane from the poisonous element inside her and defeat Malekith and the Dark Elves before Malekith takes advantage of a convergence of Realms that only happens every 5000 years to achieve his previous goal.

The strong cast includes returning Asgardians Sif (Jaimie Alexander), Volstagg (Ray Stevenson), Hogun (Tadanobu Asano) and Fandral, who is now portrayed by an unrecognizable, blonde Zachary Levi (TV’s Chuck) because Josh Dallas was too busy with Once Upon a Time. Stellan Skarsgård’s Erik Selvig is reduced to a nutcase who runs around without pants, while Kat Dennings steals every scene she’s in as she did in Thor as Jane’s assistant. Fans of Dennings will appreciate all of her snark and humorous dialogue. In fact, the humor in the second half of the film saves it from being boring. Chris O’Dowd briefly appears, and he really deserved a bigger part to lighten the proceedings. In a film with such a large number of cast members to get their moments on screen, I can understand why O’Dowd gets just a couple of scenes. Hiddleston’s personality similarly overshadows Hemsworth’s, and in many ways, the master plan should give Loki his own movie rather than him playing second string to Thor. Hiddleston seems to get fangirls in a frenzy more than Hemsworth despite the gratuitous topless shot of Thor washing himself. 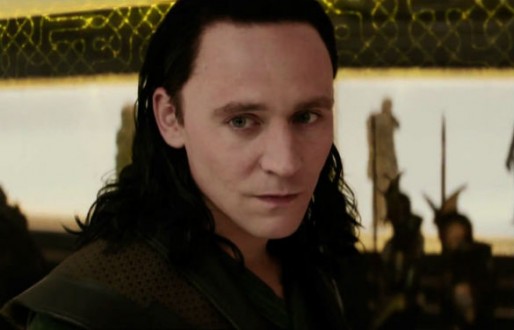 There are many great elements of Thor: The Dark World, but they are nearly forgotten in the face of the bad points. Iron Man 3 composer Brian Tyler delivers a rousing score worthy of a superhero film. In fact, the film feels a lot like it was created in the same time frame as Iron Man 3 and even uses one poster design that looks like a lot like the combination of main characters and subordinate characters that was featured on the Iron Man 3 poster. If you put the two films’ posters side by side, it’s obvious that the same creative people were involved. The special effects are as amazing as you would expect them to be. When Algrim (Adewale Akinnuoye-Agbaje — say that 10 times fast! — of Lost) transforms into a monster much like the Minotaur, it’s like an implosion of lava. The Dark Elves have a cool weapon that acts like the collapse of the universe in a concentrated area, and that’s a nice visual treat. There was clearly a lot of money spent on the digital scenery, battle scenes and makeup for the Dark Elves. I was almost more impressed with the setting for The Dark World of the title. Svartalfheim is the home realm of the Dark Elves, and it features miles upon miles of black volcanic sand. Iceland provided this magnificent landscape, and I’ll add that site to my bucket list. Stan Lee’s required cameo is one of his better ones.

When Thor: The Dark World goes wrong, it enters a tenth Realm I’ll call Inanity. For some strange reason, the Dark Elves and Asgardians brandish weapons a lot like laser pistols, so some of the battle scenes look more like Star Wars than Marvel. Similarly, the air battles between the Dark Elves and the Asgardians could be interchanged with scenes from any Star Wars film. These elements just seemed so out of place in a Thor movie, so they stood out like a sore thumb. When Malekith and Algrim start to speak in a strange language, I couldn’t help but think of the Klingon dialect from the Star Trek universe. Maybe I’m being too critical; when I’m reminded of better properties, this indicates to me that the filmmakers tried to steal some of their thunder. The worst failure of all is that other characters are more interesting than Thor. If they ever do give Loki his own movie, I doubt that many will complain about Thor as the supporting player. As in The Avengers, Thor may just be better in smaller doses. Let’s not even talk about Odin’s multitude of eye patches.

Thor: The Dark World will tide over Marvel fans until the next movies are released, and that may just be part of the five-year plan of the masterminds at Marvel. It’s a solid piece of filmmaking that entertains despite its flaws. Don’t waste any money on 3D screenings. This is a 3D conversion that doesn’t bring anything to the table. I’d recommend the IMAX version because this movie fits that format well, but that’s in 3D, so I’m torn. If you enter Thor: The Dark World with the proper expectations, the humor and better performances will make it a worthwhile experience. A surprise cameo in the middle and two bonus scenes during and after the credits make it a must to stay through to the very end. Those final moments give me hope and excitement for the future of the Marvel movies.