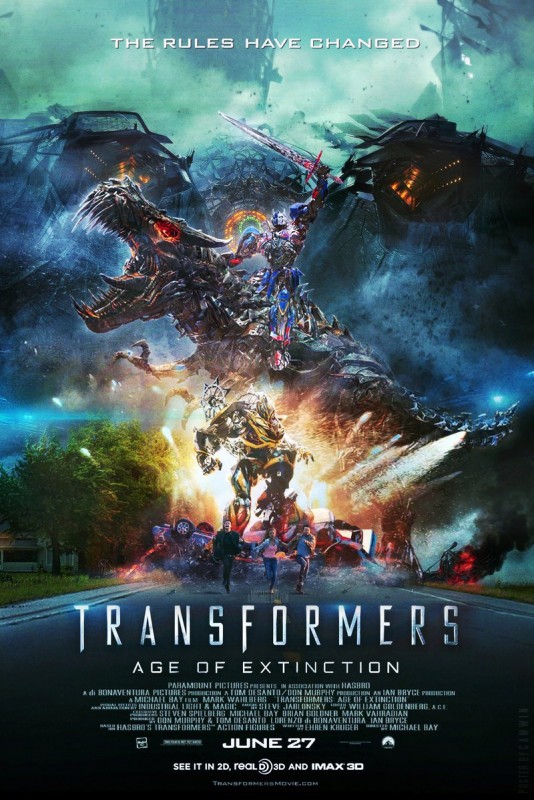 A variation of a popular saying is “nothing exceeds like excess.” In the case of summer blockbusters, it almost seems like a game for directors to see how much they can cram into the running time to please the eyes and ears if not the mind as well. When I saw the trailer for Transformers: Age of Extinction, I knew what kind of movie it would be — a busy, loud, long summer flick where anything goes and probably will. From a special effects perspective, this is a work of art that shows why the effects credits go on forever and how the job “data wrangler” came about. I don’t think that there are many shots without some kind of digital effects or stunts. That’s OK by me. Although it clocks in at 165 minutes, it felt to me like it went by very fast. In this case, I’d tweak that saying a little bit more to say that, when it’s done right, “nothing succeeds like excess.”

Director Michael Bay may have generated some legendary horror stories about working for him among his cast and crew, but he sure knows how to bring together all of the pieces into an exciting final product. Bay directed all of the previous Transformers movies as well as Pain & Gain, which may be where he got the idea to center his next Transformers sequel on star Mark Wahlberg. Bay reteams with writer Ehren Kruger (cowriter of Transformers: Revenge of the Fallen and writer of Transformers: Dark of the Moon, The Ring and The Ring Two). I wonder what Bay actually cut from Kruger’s script because what is included is very inventive, often physically impossible and almost too much to take in all at once. Transformers fans will find plenty of characters new and old to enjoy, and I was equally fascinated by the vehicles into which these characters transformed.

A short prologue establishes the involvement of the Transformers in the history and development of life on Earth. The globe-hopping adventure really begins in Texas with inventor/mechanic Cade Yeager (Wahlberg), a broke dreamer who scares up jobs wherever he can while raising his teenage daughter Tessa (Nicola Peltz of Bates Motel) and trying to keep his doofus friend Lucas Flannery (T.J. Miller) employed. It has been five years since the Battle of Chicago in the last film, and the country has turned against the Transformers. CIA bigwig Harold Attinger (Kelsey Grammer) uses international bounty hunter Lockdown (voiced by Mark Ryan) and a secret group called Cemetery Wind led by James Savoy (Titus Welliver of Lost) to hunt down remaining Transformers on Earth. Harold also keeps inventor/entrepreneur Joshua Joyce (Stanley Tucci) on the payroll as he cultivates the programmable metal substance, which he calls “Transformium,” that makes up the Transformers in order to create new Transformers from scratch. When Cade and Lucas pull an old truck out of a theater, it turns out to be the Autobot Optimus Prime (voiced, as always, by Peter Cullen) in disguise. Cemetery Wind shows up to reclaim Optimus Prime, and Cade, Tessa, Lucas and Tessa’s boyfriend Shane (Jack Reynor) are inextricably linked to the war between the Autobots and the Decepticons and the hunt for the Transformers by the humans.

After these initial setup scenes, the action just picks up and never slows down. Both the Transformers and human beings alike are put through all kinds of hell like explosions, flying through the air and destruction of cities Chicago and Hong Kong. By the time that characters have to cross from a spaceship to the Sears Tower along anchoring cables, you just have to throw your hands up in the air and go along for the ride. There’s a moment in the movie that’s also in the trailer of Tucci screaming “Oh, my God!!!” — probably the most committed delivery of this line in movie history — that summarizes what you feel like as the visual effects pass before your eyes. The film is not without its moments of levity as well. Miller, Thomas Lennon and Richard Riehle are responsible for some of this humor, and Wahlberg constantly snipes at the boyfriend he previously didn’t know about and calls him “Lucky Charms” because of his Irish accent. The Autobots themselves are funny as well, especially Hound (my favorite of this movie, voiced by John Goodman), Drift (voiced by Ken Watanabe, recently of Godzilla) and the troublemaker Brains (voiced by Reno Wilson). Bumblebee “speaks” through songs clips and radio transmissions, and he often gets the best one-liners. 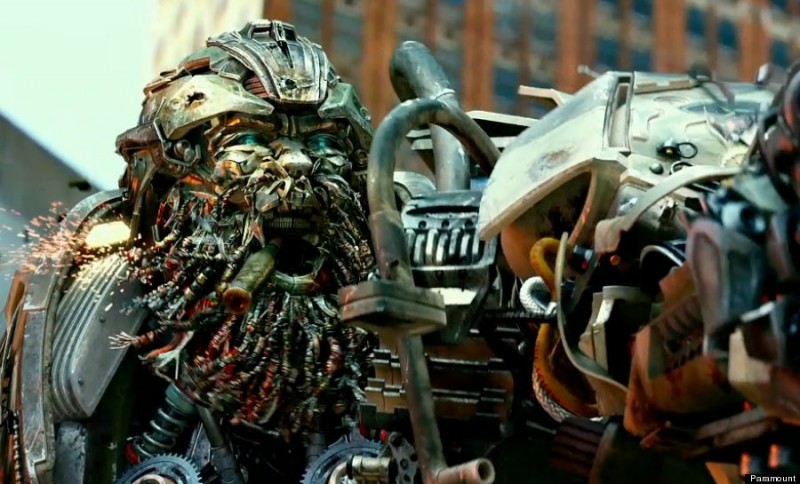 This is a Transformers movie, so expect lots of moving metal and shiny vehicles. Evidence of the advances in visual effects and computer technology are the detail in the Transformers and the destruction that happens. I wouldn’t want to have to track each piece of debris flying through the air, even with the assistance of computers. In addition to Lockdown, the other major villain is Galvatron (voiced by the legendary Frank Welker), a creation of Joshua’s company KSI. They also build the red-colored Stinger as an answer to Bumblebee, but it just doesn’t have the same personality. Of course, they fight. Actually, I think almost every Autobot engages in some kind of combat with each of the enemy Transformers. If that wasn’t enough for your taste, Dinobots show up late in the movie to assist the Autobots, and they breathe fire. I can’t imagine any Transformers fans complaining about the included characters, and if they do, there’s already a fifth movie in the works.

If there are any negatives in the movie, they would be the limited screen time given to Sophia Myles and Li Bingbing as employees of KSI and perhaps the less-creative use of Transformium to produce more Transformers rather than some other inventive purpose. It’s hard to hear Steve Jablonsky’s music among all of the explosions and sound effects, but the bits of the solid Imagine Dragons song “Battle Cry” dropped throughout the film come to fruition with the full song playing over the credits. Transformers: Age of Extinction is a perfect movie for summer and a calling card for all of the special effects artists to show off their talents.