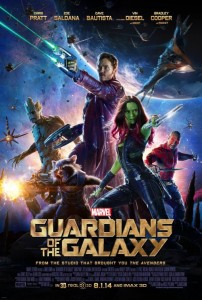 A group of outcast misfits bands together in an attempt to save us all in Guardians of the Galaxy.

In 1988, a young Earth child was abducted and raised by a group of space pirates known as the Ravagers. Now grown, Peter Quill (Chris Pratt) sets his sights on a small, highly-coveted orb that the Ravagers have been after for some time. When he finally gets his hands on it, he decides to keep it for himself. Of course, this doesn’t go over well with the Ravagers, who respond by putting a bounty out on him. The orb is also wanted by another faction led by Ronan the Accuser (Lee Pace), who hires a female assassin, Gamora (Zoe Saldana), to track down Quill and recover the orb.

Quill is spotted by two bounty hunters — a raccoon named Rocket (Bradley Cooper) and a tree-like creature named Groot (Vin Diesel) — at the same time that Gamora tracks him down. The entire group lands in jail, where a muscle-bound inmate named Drax (Dave Bautista) tells the group of his family’s murder at the hands of Ronan. Gamora explains that she’s no longer allied with Ronan and, in fact, has another buyer for the orb. If the group works together, they’ll all get rich and Drax will be able to avenge his family when Ronan comes calling. Now united, the five negotiate their release and head off to accomplish their mutual mission. Phew. 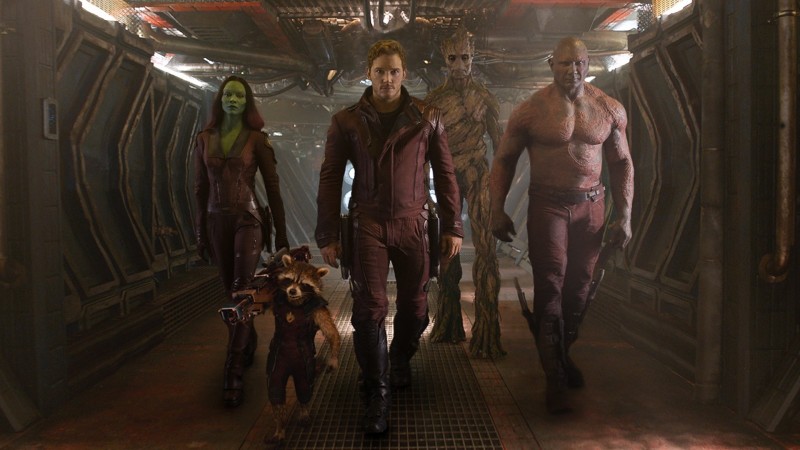 This new potential franchise in Marvel’s continuing superhero series features a deep ensemble cast of big-name stars. It’s a typical Marvel movie throughout with stunning special effects, a busy plot and lots of campy humor. Those new to the story, like me, will find a veritable plethora of otherworldly factions, planets and aliens to track. If anything, it’s a bit overwhelming, but all of the data is not essential to following the broad strokes of the story.

The main group of five heroes is one of the most eclectic in the Marvel universe, giving everyone a shot at a favorite. For the most part, none of them possess superhuman abilities. They just get by on their well-practiced skills. Rocket is the one most likely to become a fan favorite. This irresistible animal is the most cantankerous member of the group and, as a result, gets the bulk of the punch lines. This isn’t to say that the others aren’t funny. All of them get their moments to shine.

This is a story that demands your rapt attention. Be prepared to spend the entire two hours in the theater without interruption. The action and plot come fast and furious. Any distraction is apt to leave some viewers irretrievably lost. Some of the action is a bit overdone, and of course, logic is something that’s best left in the parking lot. Aside from those few concerns, Marvel’s latest combines an unexpectedly good ’80s soundtrack, nonstop action and campy goodness into a winning package of unadulterated fun.