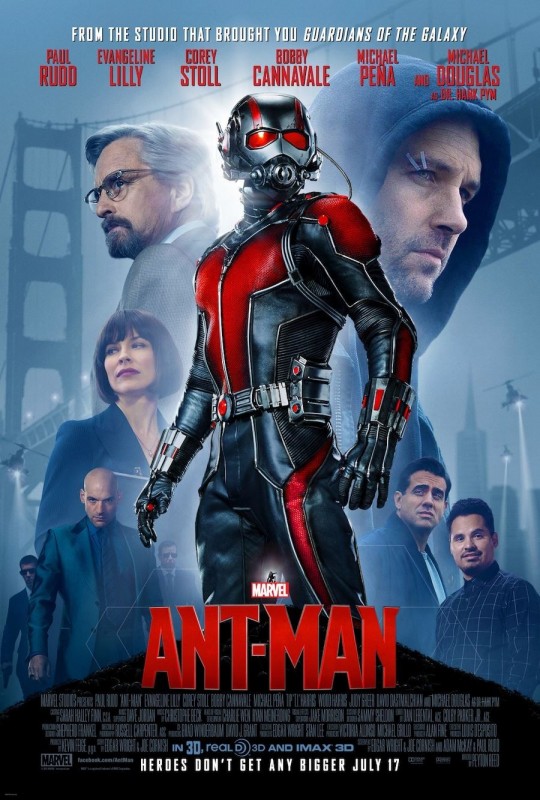 In a summer that already debuted Avengers: Age of Ultron, we didn’t really need more superhero movies. If you look over the upcoming schedule of Marvel films, they are almost all designed and scheduled to be blockbusters. Imagine my surprise when I saw Ant-Man on a similar list a couple of years ago. Ant-Man?! I thought that it might be aimed too much at the comic book crowd rather than the general movie population who would likely ignore this property. The end result is an enjoyable surprise. Despite its shaky origins and production, Ant-Man blends a large infusion of comedy with a small number of surprises for a superhero action flick that’s sure to appeal to moviegoers of all sizes.

Ant-Man got its start with Edgar Wright as its director and Wright and Joe Cornish (writer/director of Attack the Block) providing the script. Wright is best known as the cowriter/director of Shaun of the Dead, Hot Fuzz and The World’s End. Perhaps some of the right mixture of action and comedy is left over from his and Cornish’s time with the production. After Wright left for creative differences, Peyton Reed (director of Down with Love, The Break-Up and Yes Man) stepped in to direct, and Adam McKay (cowriter/director of some Will Ferrell vehicles like Step Brothers and The Other Guys) and star Paul Rudd took over the script. The result is an amalgam of styles of comedy and silliness that really fits a comic book adaptation because the books are often infused with laughs along with the serious tones and the action.

Rudd stars as Scott Lang, a burglar who gets recruited in order to help the original Ant-Man, Hank Pym (Michael Douglas in one of his coolest roles ever), save the world from a potentially dangerous weapon. Darren Cross (Corey Stoll) has taken over Pym’s San Francisco corporation and also uses to his advantage the estrangement between Pym and his daughter Hope Van Dyne (Evangeline Lilly). Pym trains Lang to wear his Ant-Man suit and command its powers of reduction in order to break in and steal the advanced Yellowjacket suit developed by Cross and his team. The plot not only involves all of the expected scenes with Lang shrunk down to ant size, but it also has some added fun with a sequence that plays out like a creative heist film.

Rudd is perfect for the role in this particular production because his snarky persona that he has developed over many comedies fits the humorous take on a superhero action film. Imagine a character who drops more puns and wisecracks than Spider-Man, and that’s Rudd’s Ant-Man. Lilly continues to surprise me, especially because her first real acting job in Lost forced her to learn on her feet. She drops the elf ears of The Hobbit: The Desolation of Smaug and The Hobbit: The Battle of the Five Armies and puts on bangs in a pixie haircut as Van Dyne, who serves as Lang’s reluctant trainer and helper. Cross is a sort of one-dimensional bad guy, which fits these types of movies but disappoints in light of the rest of the cast. Douglas is a hoot as an older inventor who needs a youthful guy to pull off his theft. I can imagine Pym and an older Tony Stark sharing drinks and stories in a superhero clubhouse. The supporting cast is strong, and you have the likes of Michael Peña, Bobby Cannavale, Judy Greer and Martin Donovan to make the most of their limited screen time. There are a few surprise characters and scenes that fit Ant-Man nicely into the expanded Marvel Universe. 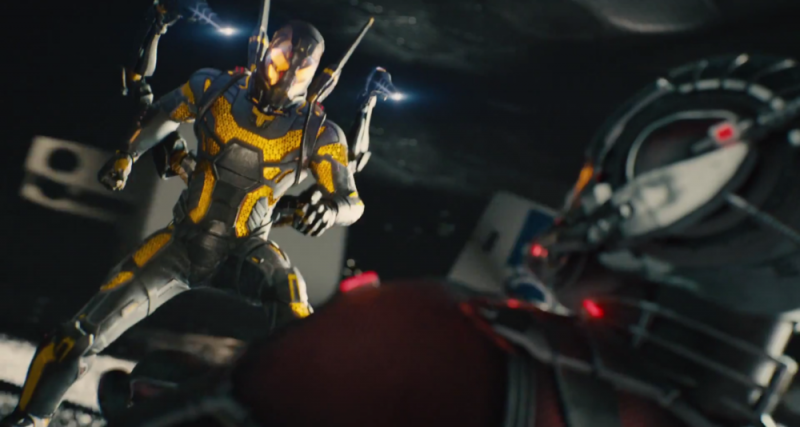 Forget the physics involved given Pym’s explanations of the suit’s abilities and shrinking technology. Instead, enjoy the excellent effects and cinematography that take you ant size as Lang enters smaller realms and actually commands ants to assist him. In a design that’s sure to fit into future plots and video games, different breeds of ants employ specialized abilities that Lang can use like tools to solve problems. These ants add to the heist and, of course, help establish Lang’s superhero identity. The fact that there’s a Macrophotography Unit in the credits shows how much the filmmakers wanted to take the shrinking beyond a gimmick and create a vibrant world right beneath our feet that Lang needs to navigate and overcome. The finale is unlike any others in superhero films, which added extra depth and earned my respect. The comedy also transfers to the shrunken scenes with bits like the one highlighted in the trailer, which exemplifies how all of the drama in a fight between Ant-Man and Yellowjacket is almost invisible to humans. Clever editing and music make the explosions and attacks sound like nothing more than little pings and pops to us.

Ant-Man proves to be bigger than the sum of its parts, and to add more heft to the story, there are nice themes about the relationships between fathers and daughters. Pym and Van Dyne have their issues, and Lang has to struggle to spend time with his own daughter after being absent while in jail for his past crimes. I didn’t want the story to end because there are so many possibilities for this character. Ant-Man was one of the original Avengers, so it’s logical that he will be incorporated into that team now that he’s had his own origin film a la Iron Man, Thor and Captain America before the Avengers series. Much like the titular creatures, Ant-Man was able to lift the weight of the latter half of the summer on its shoulders and deliver an impressive, humorous experience that was fun to watch with no expectations getting in the way.