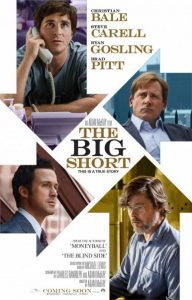 A small group of financial outsiders predict the massive housing market collapse in The Big Short.

Nearly everyone with a connection to the housing market found themselves living in a dream world of riches. Investors, bankers and mortgage lenders reveled in an environment of perpetual profit. Would-be homeowners could get into a home with little more than a driver’s license. No job? No problem. Everyone won until nearly everyone lost big when the bubble finally burst in the late 2000s. It was a case of not being able to see the forest for the trees or, in this case, the bottom line for the money. On the periphery, a few number-crunching nerds analyzed the data and tried to raise the alarm. No one wanted to hear it, so they decided to go ahead and literally bet against the house. The group includes Dr. Michael Burry (Christian Bale), a socially awkward hedge fund manager with an eye for data and one of the first to see the impending downfall. Jared Vennett (Ryan Gosling) is a Wall Street trader with a vulture’s instinct who smells a carcass just over the next hill. Two small-time private-equity players enlist the aid of privacy-paranoid trader Ben Rickert (Brad Pitt). Finally, manic money manager Mark Baum (Steve Carell) and team can’t believe that all of this is legal, but they certainly don’t want to be the only ones to miss out.

This is a film about an extremely serious subject matter. The specific details are involved and numerous. Here’s Academy Award-nominated actor Leonardo DiCaprio to explain my thoughts on the film: “I got attention by being funny at school, pretending to be retarded and jumping around with a deformed hand.” So what does that have to do with the film, you may be wondering? As it turns out, everything.

Director Adam McKay (Step Brothers and Anchorman: The Legend of Ron Burgundy) tries to tackle some meatier material, only to end up as inconspicuous as a clown at a funeral. It feels like Schindler’s List peppered with lewd jokes every 15 minutes or so. McKay’s misstep is that distracting. If the jokes weren’t strange enough, then consider the frenetic visuals that seem to spew forth randomly from the dreams of an amphetamine junkie on a cocaine blitz. Meanwhile, the plot seems to exist in an entirely different universe. It uses up half of the film, repeating the same refrain like a stuck turntable needle — “The sky is falling…,” “The sky is falling…,” “The sky is falling…” We get it already. The second half of the film does a reverse-Superman. It heads for the closest phone booth, sheds its non-human craziness and emerges as an upstanding, mild-mannered movie.

The message is obviously powerful and, at least for the last hour, interesting. Do yourself a favor and see Inside Job instead. It’s a much better effort without all of the crazy. What do I mean by crazy? Here’s famed American writer and illustrator Theodor “Dr. Seuss” Geisel to explain it as simply as possible: “Being crazy isn’t enough.” [If you didn’t think those quotes fit in this review, then you can forget about liking this film.]