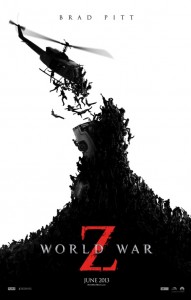 Zombies are all the rage these days thanks to the success of the TV series The Walking Dead, which follows a long line of other zombie films, TV shows, comic books and books. It all goes back to Night of the Living Dead, but there have been all kinds of interpretations that lead to unique creations like Warm Bodies or Pride and Prejudice and Zombies. World War Z capitalizes on this trend and adds its own flavor to the mix. Although there are certainly elements of classic zombie survival stories, this is different in that it’s more like Contagion or Outbreak with the emphasis on finding the source of the zombie plague and stopping its spread to healthy human beings. Thus, World War Z doesn’t offer a lot that’s new, but it packages it in a tense, exciting way that is worth a look for fans of the genre.

Director Marc Forster (director of Quantum of Solace and Monster’s Ball) and writers Matthew Michael Carnahan (writer of State of Play and The Kingdom) and Drew Goddard (cowriter of The Cabin in the Woods and a writer on Lost) & Damon Lindelof (a writer on Lost) adapt the popular Max Brooks novel. The production company of star Brad Pitt won the bidding war over this property, so this might have been an entirely different movie if the other party was awarded the contract. The filmmakers do a good job of keeping tension high as characters peek behind corners and do their best not to disturb the zombies.

An increasingly violent credits sequence brings us up to speed on the cause of the zombie plague. Animals rip each other apart, and Marco Beltrami’s unsettling music sets the tone for the film. The Lane family is enjoying breakfast together in Philadelphia. Not a bit of the film was filmed in Philly. Instead, Glasgow stands in for the city. Nevertheless, the filmmakers try to make the location feel authentic by using Philly newscaster Ukee Washington, the go-to guy for movies set there who has appeared in a number of Philly-centric films over the years. Gerry Lane (Pitt) and Karin Lane (Mireille Enos of TV series Big Love and The Killing) have two daughters, Rachel (Abigail Hargrove) and Constance (Sterling Jerins). Rachel has asthma, but that fortunately did not turn into a major plot element. When the family gets caught in the middle of zombies overrunning Philly, Pitt takes his family out of there as soon as possible and talks to his former boss at the U.N. to see what’s going on.

After Philly, the Lanes make their way to Newark where they hole up in the apartment of a Hispanic family before taking their son Tomas (Fabrizio Zacharee Guido) with them to the U.S.S. Argus after a daring airlift via helicopter on the roof. Someone in Tomas’s family says that “movement is life,” and the escape from Newark is a step in that direction. What follows is part detective film, part action film and part survival film as Gerry goes from location to location around the world to investigate the zombie outbreak and try to find a cure for it. Thierry Umutoni (Fana Mokoena) will only guarantee the safety of Gerry’s wife and children on the vessel if he helps the U.N. solve this crisis. Gerry agrees to Thierry’s conditions, so he’s soon off to a U.S. base in South Korea where the soldiers refer to the zombies as “Zeke” and Gerry meets a locked-up ex-CIA agent (David Morse) who points him in the right direction.

I like the travel aspect of the film because it truly does make it feel like a world problem. From South Korea, Gerry makes his way to the fortified city of Jerusalem, which has been able to keep out the zombies because of the foresight of the skeptical and visionary Jurgen Warmbrunn (Ludi Boeken), the so-called “tenth man” in Israeli politics who questions everything in order to come up with unusual solutions to problems. Up until this point, Pitt is the only real star in the film with characters coming in and out of the narrative, including a quartet of W.H.O. doctors in Cardiff, Wales, played by familiar actors Peter Capaldi, Pierfrancesco Favino, Ruth Negga and Moritz Bleibtreu. If there’s anyone who rises to be a costar with Pitt, it’s Daniella Kertesz, an Israeli TV actress who delivers a breakout performance. She plays a soldier named Segen who accompanies Gerry from Jerusalem onwards. She has a strong presence and some difficult scenes, so I hope that World War Z takes her career to another level much like The Girl with the Dragon Tattoo did for Noomi Rapace.

You can’t talk about a zombie movie and not comment on the special effects. The zombies here are unusual in that they move with a speed unseen before, almost like galloping horses, so their creation is a combination of digital effects and special effects makeup. An early transformation of a human being into a zombie after infection involves some contortions that call to mind some of the better werewolf transformations in horror films. In addition to moving fast, the zombies throng in ways that almost look like cooperation. Groups of zombies in the past would just bash against barriers to make their way to healthy people for food. The zombies in World War Z climb on top of each other to form human chains that take them over obstacles. The trailer shows a horde of zombies making their way up a wall in Jerusalem almost like ants. This scene and others like it remind me of the Clive Barker short story “In the Hills, the Cities” in which entire cities are bound together to form giants as tall as skyscrapers. World War Z doesn’t skimp on special effects and nasty zombie attacks, and there are plenty of memorable scenes that include an airplane attack to rival all others and laboratory exploration that comes off like a level of a Resident Evil video game.

World War Z kept my attention from those violent opening credits until the final moments. I don’t believe that the filmmakers delivered a satisfying ending, but that doesn’t discredit the scenes beforehand. If I could compare it to any other zombie movie, I would say that it has the grim tone of 28 Days Later… because of the universal problem that decimates most of the Earth’s population. A couple of Muse songs appear in the soundtrack although you’ll more remember Beltrami’s score. Even though the film had a special preview screening in five U.S. cities that included collectible 3D glasses, this is another movie that’s better watched without the 3D gimmickry. World War Z is a quick diversion before the next summer blockbuster and a somewhat fresh approach to zombies. It doesn’t rise to the level of a classic, but it’s certainly entertaining.